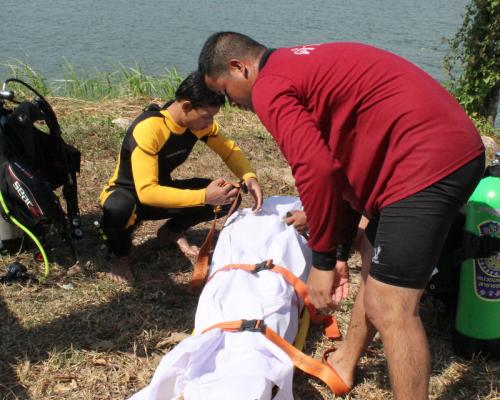 PHUKET: A man from Mukdahan province who had just found work in Phuket drowned in an abandoned tin mine in Chalong yesterday.

Police received a report around noon that Kamdee Kammoon, 35, had gone missing after entering the water-filled old tin mine on Soi Na Yai in Chalong.

“When we arrived we saw his jeans by the side of the lake, but we couldn’t see him,”said Chalong Police officer Punthasak Chaithong.

Surasak Wanlapha, a friend of Mr Kamdee’s, told police that Mr Kamdee had arrived in Phuket two or three days before to look for a job. He found work in construction and was due to start on February 11, Lt Punthasak said.

“He was drinking the night before he started work, and when he woke up the next day he had a hangover, so he did not go to work. Instead, he bought more liquor to drink with another friend at a rented house near the lake,” Lt Punthasak explained.

“At around 9:30am, Mr Kamdee said that he felt hot and wanted to take a shower. When he hadn’t returned after 20 minutes, his friends searched the area and found Mr Kamdee’s jeans on the bank of the lake,” he said.

After a Burmese worker at a nearby camp said she had seen Mr Kamdee go into the lake but not come out, Mr Kamdee’s friend called the police.

“There were no cuts or wounds on his body. We have sent the body to Vachira Phuket Hospital to determine the cause of death,” Lt Punthasak said.