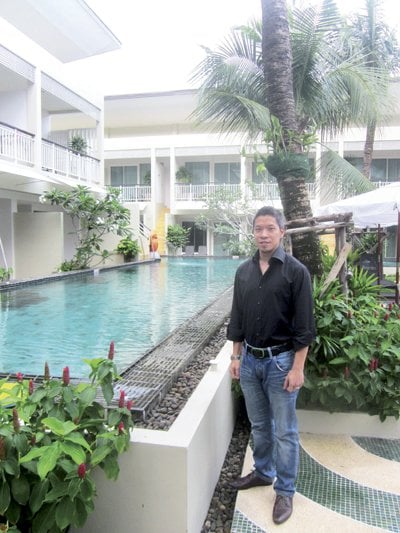 PHUKET: Amid the fast paced “age of online” a bulk of local businesses have fallen behind a rapidly evolving consumer base, and companies need to catch up, says Ariya Banomyong, head of Google Thailand

The country’s first manager for the iconic IT giant was in Phuket last week and the Gazette had the privilege to pick his brain for an hour.

“According to recent marketing research conducted by Nielsen in Thailand, the average consumer spends 11 hours per week in front of the TV, but 17 hours on the computer,” said Mr Ariya, who was born and raised in France and speaks four languages.

“Prime time is peak time. After coming home from work, you’d expect people to be watching TV – the news or soap operas – but they’re increasingly on the internet.

“The modern consumer multitasks, consuming traditional media and online media at the same time. The two types of media are complimentary. Traditional media is definitely not dead,” he said.

Mr Ariya pointed out that a third of Thailand’s population is online, compared to about 30% worldwide.

“This shows that internet penetration is not necessarily lagging in Thailand, even though broadband internet is still behind.

Ariya went on to highlight another booming trend ofthe last three years, which he says businesses would be wise not to ignore.

“The smart phone market has grown tremendously, with 28% of Thais owning one,” he says.

Elaborating on what he calls the “Online – Offline link,” Ariya said, “We find that when a product is launched using traditional media channels such as newspapers, TV and Radio spots, subsequent interest online is triggered.

“For example a new concept car is displayed at a car show in Japan or Abu Dhabi. Though it is not even available on the market, yet people in Thailand have heard about it offline and are already searching for it online.

“Using a free Google online tool called Insights for Search we can actually see the instant people began searching for a special keyword, like for example the infamous iPhone5 [which is not available yet] versus searches for the iPhone4, and can even track the search lifecycle in a country over time.”

Ariya points out that most businesses realize they need to do something to catch up with consumers but are not sure what to do.

“According to marketing research from the Consumer Commerce Barometer, on average 8 out of 10 consumers in Thailand are searching for local businesses, products and services.

“However only one out of 10 local businesses, products and services have a website,” he said.

Indeed, businesses need to catch up with consumers.

Ariya continues: “By surveys we found that there are three main reasons why these companies don’t have a website.

“In their perception, establishing a website is either very complicated, time consuming and/or costly.

“So, it has been our task to bridge the gap between these perceptions and actuality.

One such initiative is Google’s GTBO [Get Thai Businesses Online], a program targeting local businesses in Thailand, mostly SMEs [Small and Medium Enterprises].

“Through a partnership with the government and other private sector organizations, participants can get a free website, domain hosting, email and web hosting for life.

“Now we have over 88,000 sites since the project launched in June last year, however only 7% of these are in the Southern region.

“Thus, we see a massive amount of opportunity and potential for the GTBO program for SMEs in the South.

Delving into market penetration beyond GTBO, Mr Ariya went on to highlight two products from among its offering of 70, that local businesses can benefit from now: Google+ Hangouts and StreetView.

Hangouts are a one-to-many chat or conversation feature on Google+ which allows for remote teleconferencing.

“A recent example came about through a partnership with TRUE, who’s 3G+ network enabled a community health center doctor in Nongsamong Village in Nakorn Ratchasima Province, 2 hours north of Bangkok, to use Hangouts to consult with a specialist to diagnose a difficult case.

But Google+ isn’t just for connecting rural communities with healthcare, big brands are also gaining traction on what Google calls its’ social platform.

“We recently launched StreetView for three cities in Thailand: Phuket, Bangkok and Chiang Mai. We’ve gotten fantastic feedback from this program since we started driving to capture images across Thailand in September. Actually the week of the launch saw Street View become the most searched term in Thailand.

“Now companies in these cities can embed StreetView onto their website. This allows companies, be it a hotel or restaurant, to show off the actual 360 view of their establishment’s scenery and surrounding location.

“We are planning to launch StreetView in the other provinces, but this will take some time.

Meanwhile, in partnership with TAT, the “My Miracle Thailand” campaign will allow locals to contribute by suggesting special tourist attractions to feature on StreetView.

“For this we’ll use a Google Trike which is more suited for accessing certain sites that the Google StreetView cars couldn’t,” he revealed.

Speaking about the success of its past and present campaigns, Ariya said that establishing strategic partnerships has been integral.

According to research from AMI, prior to the GTBO launch an average of 20,000 new websites were launched in Thailand annually. Today, Dot Arai has effectively tripled that number with 88,000 businesses signed up and over 60,000 websites live and open for business.

“Almost any business can go online, with success stories ranging from a rice and curry shop to homemade cupcakes and even a tailor-made curtain business who went online to keep her business afloat during the floods.

“Our partners have delivered over 400,000 hours of in person training to help entrepreneurs take their first steps online. We’re ready to demonstrate our strong support for the national goal of economic growth in 2012 and see Thai businesses continue to grow sustainably online and inspire other countries to do the same,” he concludes.