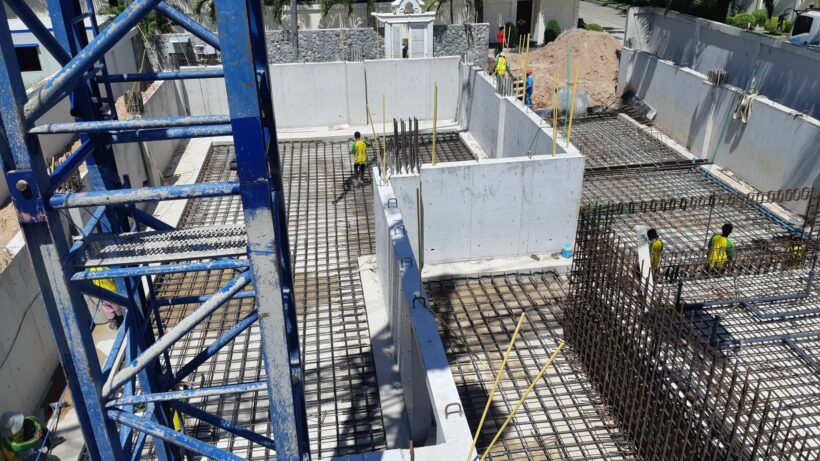 PATTAYA: A few months ago, the German architect Mario Kleff demolished two new villas on Pratumnak Hill, which he is now replacing with a new one. The villa is being built using German engineering quality, with reinforced concrete and long steel girders.
Intensive construction work has been underway at the Majestic Residence, Soi 366 Kasetsin, on Pratumnak Hill since May. Numerous trucks deliver steel and concrete every day for the construction of a 1200 m2 villa. It was also planned to retain the original architectural style in order to integrate it into the surrounding houses. So far, the designer Mario Kleff and his construction company Wandeegroup have carried out heavy cement work and used long steel girders that are reminiscent of a state-of-the-art building in Germany. It remains to be seen how work on the new villa will continue.

The foundation and the basement have already been completed. The next construction phase includes the installation of a post-tensioned cement slab which is to lie on steel girders up to 48 meters long. The architect points out that he already used this technique in 2010 in the eight-story Park Royal 2 residential building and thus achieved spans of over 20 meters. Mario Kleff became known in Pattaya for his designs for the Wong Amat Tower and the Club Royal apartment complex in Naklua. When his new villa is completed, the German-Thai designer will have reason enough to celebrate, because he is sure to set new standards in residential construction in Pattaya.

Mario Kleff was born on November 21, 1967, in Boppard. Since 2004 he has lived in Pattaya with his wife Nittaya Wongsin and daughter Jiang Li. However, the architect didn’t feel at home until 2016 when he received his Thai citizenship.

Pattaya rocked by heavy rains and floods with more predicted