While Russell Crowe’s tweets while filming his new movie in Thailand caused a stir on Thai social media, winning praise from PM Prayut Chan-o-cha and Phuket Sandbox authorities, one group was not nearly as enthused about his posts. The Metropolitan Electric Authority in Bangkok released a statement defending itself after Crowe posted a photo captioned “Bangkok Dreaming” that depicted Thailand’s infamous jumble of sparking electrical wiring.

The post had garnered tons of responses and retweets with the hashtag “Welcome To Bangkok” trending, though many intended the greeting to be backhanded. The picture was used to simultaneously welcome the actor while delivering barbs to the poorly managed electrical grid and infrastructure of Thailand.

The MEA in Bangkok were not amused. They posted a response to the tweet and especially the negative comments by Thai people. In their rebuttal, they claim that the tangle of cables seen in Crowe’s tweet was not under the authority of the MEA.

They say that the wires are, in fact, not even electrical or power cables. They did not clarify what the wires were for or who is responsible for them. The statement vowed that the MEA takes safety very seriously and that any issues or problems with electrical wires or power cables should be handled by promptly contacting the MEA directly. 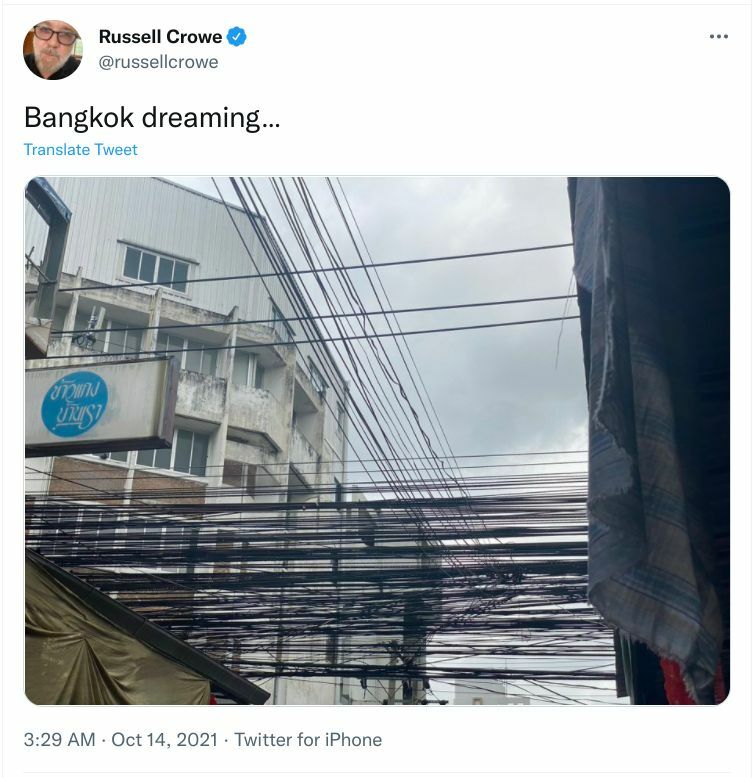 HiuMak
On 10/17/2021 at 12:17 PM, Thaiger said: While Russell Crowe’s tweets while filming his new movie in Thailand caused a stir on Thai social media, winning praise from PM Prayut Chan-o-cha and Phuket Sandbox authorities, one group was not nearly…

mickkotlarski
On 10/17/2021 at 11:52 AM, JamesE said: Definitely not Thai grade wiring. They're stretched tight, no loops, none are wire-tied to its neighbor, they're all of uniform gauge, they're all up where you can't touch them. Something's definitely wrong. Probably…
RWD
On 10/17/2021 at 11:17 AM, Thaiger said: While Russell Crowe’s tweets while filming his new movie in Thailand caused a stir on Thai social media, winning praise from PM Prayut Chan-o-cha and Phuket Sandbox authorities, one group was not nearly…

Bluesofa
2 hours ago, RWD said: They look mostly like telecoms cables - probably mostly non functional as a lot of BKK now fibred and underground. But telecoms saving money by not removing them. Maybe some industrious startup can go out…
john1946
On 9/9/2021 at 8:06 AM, Thommo said: Just goes to show what happens when you forget to pay your tea money In my country if wiring was put up like this the authorities would impose a heavy fine and maybe prison …