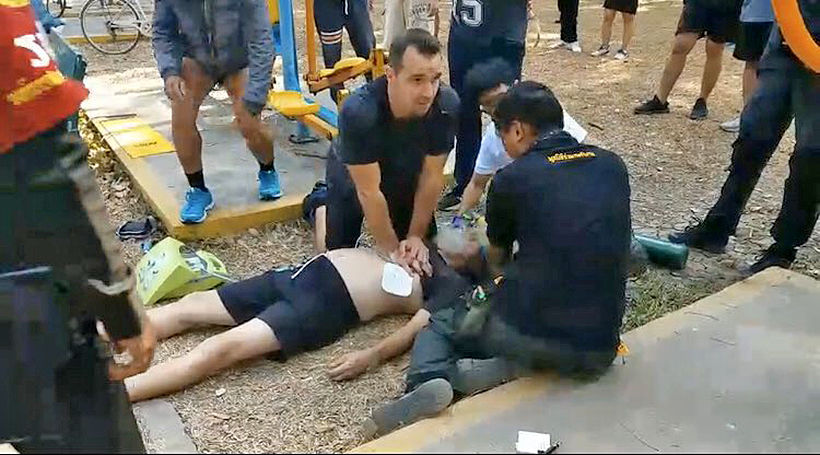 A Thai woman has taken to social media in an attempt to track down the foreign man who saved her boyfriend’s father after he had chest pains and an apparent heart attack in Bangkok’s Lumpini Park. The Bangkok Post reports that a foreign man performed CPR on the man after he fell unconscious and his heart stopped beating.

Now the family wants him to know the patient is alive and recovering at King Chulalongkorn Memorial Hospital. They credit the foreigner with saving his life and wish to meet him to express their gratitude.

The girlfriend of the patient’s son has taken to Twitter in her quest to track him down, posting a photo taken as the foreign man performed CPR on her boyfriend’s father.

“I am looking for the foreigner in this photo. Please tell me if you find him. He is the one who saved the life of my boyfriend’s father on the afternoon of December 6. My boyfriend’s father had passed out and his heart had stopped beating. This foreigner performed CPR on him until his heart started beating. Rescue volunteers then rushed him to King Chulalongkorn Memorial Hospital. We want to thank him and tell him that the man he helped is now safe.”

Her message has been widely shared as other netizens help her in her bid to find the Good Samaritan.