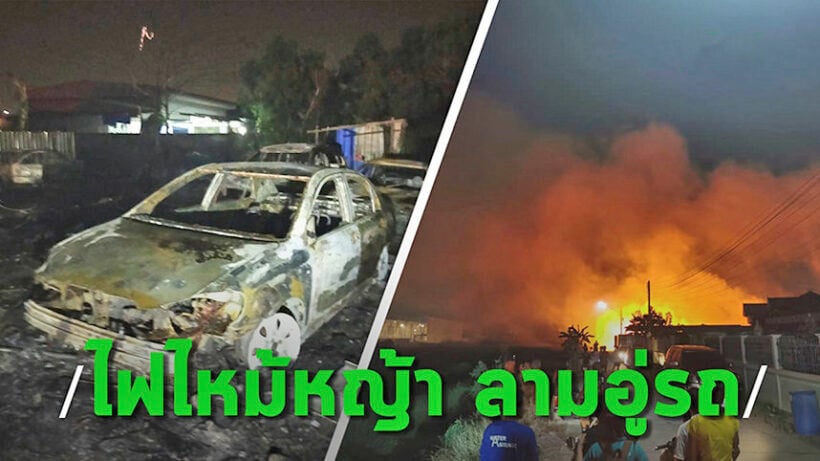 Fire ravaged a garage in Pathum Thani, just north of Bangkok, last night, causing a massive explosion of gas cylinders stored inside. Damage was extensive but, fortunately, no injuries were reported. Police at Khu Khot police station were notified at about 8pm, and say the bush fire broke out in tambon Lat Sawai of Lam Luk Ka district.

More than 10 fire trucks, firemen and rescue workers rushed to the scene. They saw grass burning on a vacant land plot and an adjacent automotive parts shop in flames. There were 10 cars and various auto parts, as well as gas cylinders, in the garage, and as the fire tore through it, the cylinders exploded.

Firemen took almost 1 hour to bring the fire under control. The garage, all the cars and other contents were destroyed. Pieces of the gas cylinders also damaged several roofs in the area. 53 year old Khwanmuang Bamrungkit, whose roof was damaged, says he was having a meal when the flaming debris fell on his roof.

56 year old Bunthan Seelabut says he and his family were also eating when the fire broke out. He immediately sprayed water on the walls of his house while his wife called for firemen.