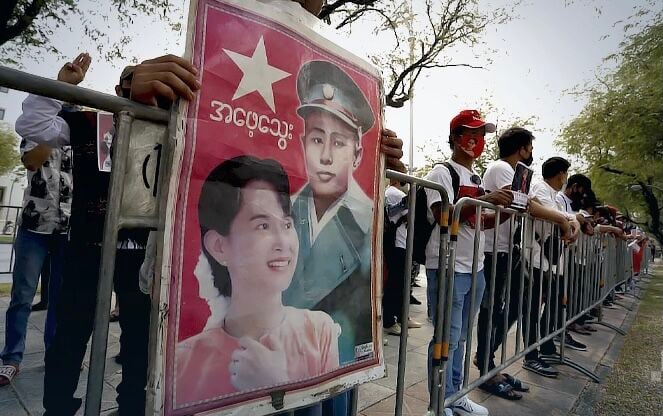 Hundreds of Burmese nationals gathered outside the United Nations office in Bangkok to protest against the military coup in their home country. Many raised their hands in the 3-finger salute, a symbol of resistance and democracy taken from the movie the Hunger Games and widely used in Thailand’s pro-democracy movement.

Some protesters held photos of Aung San Suu Kyi, the leader of Myanmar’s League for Democracy Party. She had won the election in a landslide, but was arrested when he military seized power last week. Some held signs with her picture that said “We are together with you.”

Police say the estimate around 300 Burmese nationals gathered outside the UN’s Economic and Social Commission for Asia and the Pacific on Ratchadamnoen Nok Avenue. The protesters wore face masks to abide by Covid-19 prevention measures. The Bangkok Post says the protesters were ordered to end the demonstration because it violates the emergency decree which prevents public gatherings.

Last week, protesters also gathered outside the Myanmar Embassy in Bangkok following the coup in the neighbouring country. Riot police dispersed the crowd and 3 Thais were arrested.