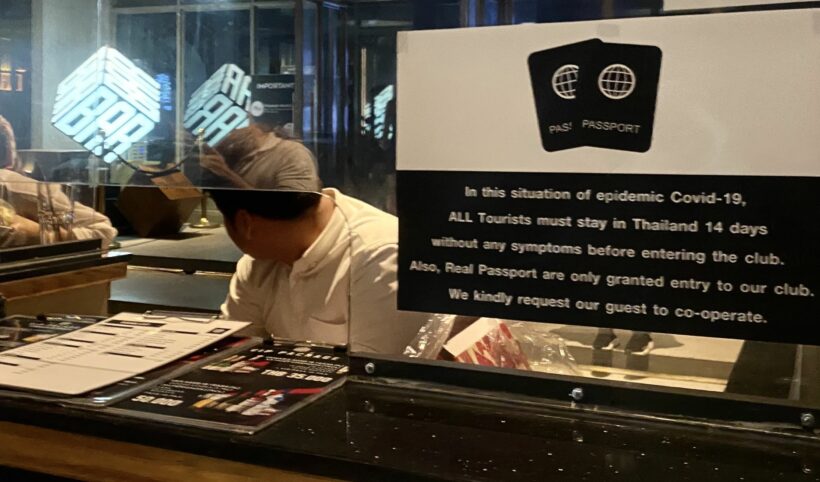 A Bangkok nightclub has set up what resembles an immigration counter outside the venue to check foreigners’ IDs and make them pay up before entering. At BarBarBar in Thong Lor, Thais get in free, but foreigners are asked to step aside to the booth and either pay 500 baht or buy a bottle of alcohol before entering the venue.

Bouncers outside BarBarBar check everyone’s IDs before they enter, making sure they’re at least 20 years old. But foreigners are pointed to the booth and are basically vetted before entering.

An employee sits behind a clear barrier to check IDs and collect cash. A sign reads: “In this situation of epidemic Covid-19, ALL tourists must stay in Thailand 14 days without any symptoms before entering the club. Also, real passport are only granted entry to our club. We kindly request our guest to co-operate.”

Foreigners have 2 options at BarBarBar: Pay 500 baht or cut a deal for a group of foreigners by purchasing alcohol. Menus are at the counter listing some alcohol packages priced at 15,000 baht and 17,000 baht.

While the club has an advisory for foreign tourists, only around 200 foreign tourists have been able to enter Thailand since travel restrictions were put in place in March. The first group of visitors on the new Special Tourist Visa (just 39 people) arrived last month and were recently released from quarantine.

Also… who takes their passport to a nightclub? The nightclub has taken other forms of identification, like a digital work permit, but apparently the club has turned people down for not having their real passport. A man left a review on Google saying he was an old customer at BarBarBar, but the last time he tried to get in the bouncers turned down him down because he just had a photo of his passport. “Really racist,” he wrote.

Here’s what some of the reviews say on Google…

“Didn’t let me in because I was a foreigner… Racist bar. Will never go back.”

“A great bar. But if you are a westerner, you’re not welcome there.”

“This place clearly doesn’t want foreigners. Middle of a pandemic, zero tourists in the country, and they want to charge 500 baht while Thais are free. I guess it’s free if you buy a bottle, which I was going to do, but the rudeness I experienced at the “foreigners counter” along with the foreigner charge was a no go for me. Walked 30 metres to another club, bought a bottle and enjoyed my night.”

The Thaiger reached out to BarBarBar for comment, but they did not respond.

Foreigners in Thailand are familiar with dual pricing. The upcharge for foreigners at tourist destinations like temples and national parks led local blogger and school employee in Samut Prakan, Richard Barrow,  to start the initiative 2PriceThailand. Since then, the Tourism Authority of Thailand announced they would start discussions with national park officials and the Wildlife and Plant Conservation department about ending dual pricing for foreigners.

While duel pricing is nothing new in Thailand, some venues and events started banning foreigners after the coronavirus outbreak. Back in July, Fullmoon Terrace and Bar in Lat Phrao, the northeast suburbs of Bangkok, refused to serve foreigners. Blogger Yan Marchal posted a video of himself visiting the bar and being asked to leave almost as soon as he sat down.