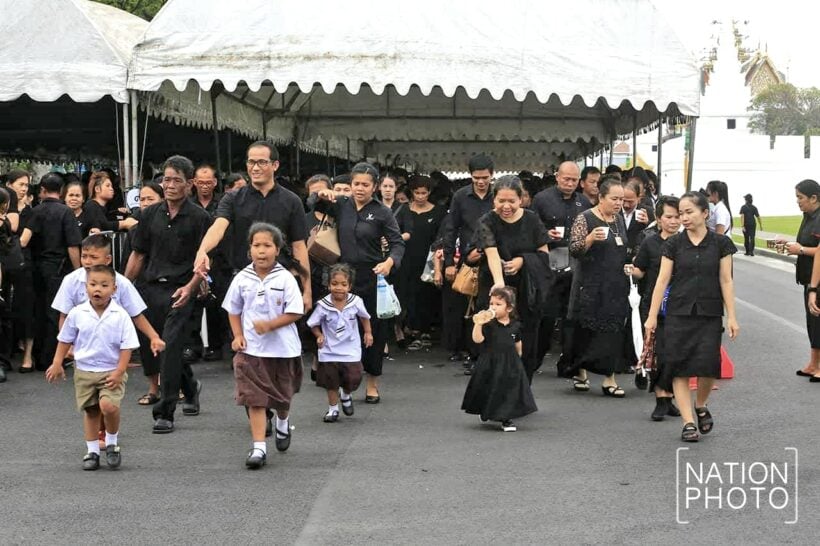 With two days remaining for citizens to pay their last respects to His Majesty the late King Bhumibol Adulyadej at the Grand Palace in Bangkok, the number of people who have viewed the Royal Urn has topped 12 million.

The Royal Household Bureau on Tuesday reported that 12,443,890 mourners had visited the Dusit Maha Prasat Throne Hall in the past 334 days. Thursday (October 5) is the final day for public viewing. Donations received as a form of making merit for the late King now total 870,377,871 Baht the bureau said.

Monday alone saw nearly 79,000 mourners visit the throne hall and donate 5.46 million Baht, the final visitors admitted at 3.45am on Tuesday. The beloved King Rama IX died last October 13 and private citizens were allowed to pay their respects in front of the Royal Urn from October 28 onwards.

The funeral is scheduled for October 25-29, with the cremation set for October 26. The daily highest record for throne hall visits were set on October 1, when 90,300 mourners viewed the Royal Urn, followed by the Monday’s 78,948 visitors and September 26. when there were 73,889 mourners.

Phuket gets ready for the Late King’s local cremation ceremonies