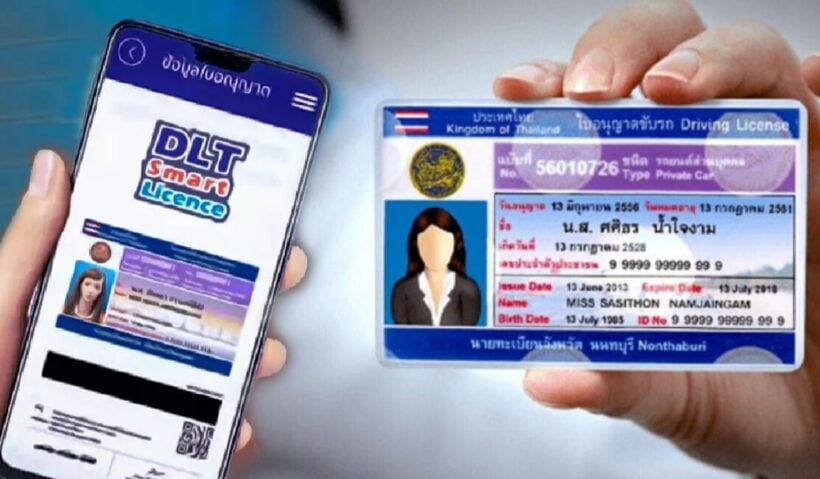 The Department of Land Transport is getting modern, introducing a QR code people can keep on their mobile phone to replace a physical Thai drivers licence. Drivers will be able to screenshot a “DLT QR licence” and use the image of the QR code as a substitute for any sort of physical card.

Once the licence, front and back, has been scanned or clearly photographed and the information is shown to be clear and readable, it can be verified online and used as a replacement for a physical card. The QR code stored on a driver’s mobile phone or another device can then serve as a substitute for any driving or traffic-related identification.

But with the new technology comes an additional added bonus, as driver’s licenses are often used as identification verification. Printed copies of the DLT QR license screenshot in colour or black and white can be used in place of the driver’s licence card for any time a government agency requires a valid ID. A copy of the image can be submitted with documents instead of a copy of a physical card.

The new QR enabled cards will be issued for all new licenses, but old traditional licenses will still be valid for the foreseeable future according to the DLT.

“Traditional driving licences can be used until they expire, after which they will be replaced with a smartcard upon renewal. Those who hold the lifetime driving license can use their traditional licence for as long as they like.”

Stonker
3 hours ago, Santa said: Like most things implemented in Thailand the thing is never thought threw properly first. An example being when they banned the carrying of passengers on the back of pick ups. Approx a month or so…
DiJoDavO
4 hours ago, Bluesofa said: It sounds like it. When the QR code licences first came out it was news, although at the time there was no law in place to allow you to produce a QR code image instead…
Stonker
5 hours ago, Bluesofa said: I'm guessing now - as it hasn't been clearly explained - that perhaps the law has now been changed to allow the police to accept it instead of the real licence? Your guess is…

Bluesofa
32 minutes ago, Stonker said: 6 hours ago, Bluesofa said: I'm guessing now - as it hasn't been clearly explained - that perhaps the law has now been changed to allow the police to accept it instead of the real…
Stonker
5 hours ago, Bluesofa said: Do you mean in the original of this particular article? The reason I'm asking is that last year when it was publicised, a few days later there were more details saying that although they had…