The Thai PM, and the CCSA, have confirmed that Phuket’s re-opening WILL happen on July 1. This confirms months of insistence that the plan will go ahead.

The confirmation comes against a background of daily new infections in the country of over 2,000 and ongoing confusion about the country’s vaccine roll out. Saturday’s Thailand Covid report HERE.

According to the Tourism Authority of Thailand announcement, people arriving in Phuket will need to be fully vaccinated, produce a negative test when they arrive in the province, along with another test on the fifth day of their visit, all at their cost.

Travellers will need to remain on the island of Phuket for at least 7 nights before able to travel elsewhere in the country.

Importantly, apart from having to stay on the island, there is no quarantine under the current plan. There’s also little detail about any other paperwork that will be provided at this stage.

Phuket is still under a soft lockdown which includes restrictions for restaurants, serving of alcohol, opening hours of shopping centres and other shops, closure of bars, arrival restrictions, mask wearing and requests for people to stay at home each night between 10pm and 4am. All these will need to be lifted, we assume, before the July 1 deadline.

Yesterday’s announcement also follows a week where Thai Airways announced weekly flights, directly to Phuket, from a number of European cities. The company, currently under a restructure plan, has announced that bookings are open. There are also thousands of Thai Airways customers who are awaiting refunds for flights booked last year after the airline was grounded in April 2020.

Whether travellers would be able to fly into Bangkok, transit, and then fly to Phuket under the new arrangement is yet to be announced.

The TAT aimed the announcement primarily at hotel and service providers urging them to get ready and committing their resources to publicise the re-opening of the island.

Phuket’s “sandbox” plan will be a pilot for additional reopening around the country in coming months, starting with high volume tourist locations.

Yesterday the southern island province announced a further 3 new cases as the daily Covid infection rate slowly falls. The provincial government is also trying to fast-track vaccination so that 70% of the island will be fully vaccinated by the reopening date.

We’ll have more details about this grand reopening to international travel as they emerge.

Here are the current guidelines for travelling to Phuket… 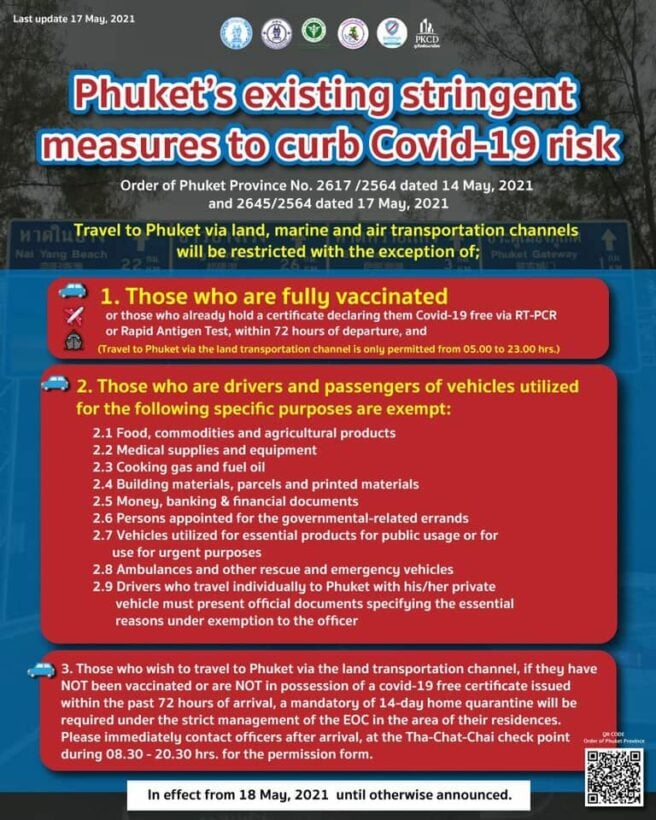 AussieBob
I would bet on two thi9ngs about this. It wont happen very well - not many takers. If it does happen - they will stuff it up.
Tim
not gonna happen, they will call off at the very last second.

AussieBob
7 hours ago, Tim said: not gonna happen, they will call off at the very last second. Probably true. But even worse than that:-- After suckers/people arrive they will have a few new Covid cases on the island and they…

King Cotton
Interesting and insightful comments, AussieBob . . . as per usual. I guess, in a nutshell, you're saying 'problems probable!' and I can only agree. Tweaking or bending accepted protocols is bound to slap someone in the face, either locals,…

AussieBob
Yes KC - too many variables for Thailand to control - for anyone to control in fact. All over the world the Govt vaccine rollouts are struggling to varying degrees. Plus there is no science yet to show that they will…

So what's the deal with the Sinopharm vaccine?