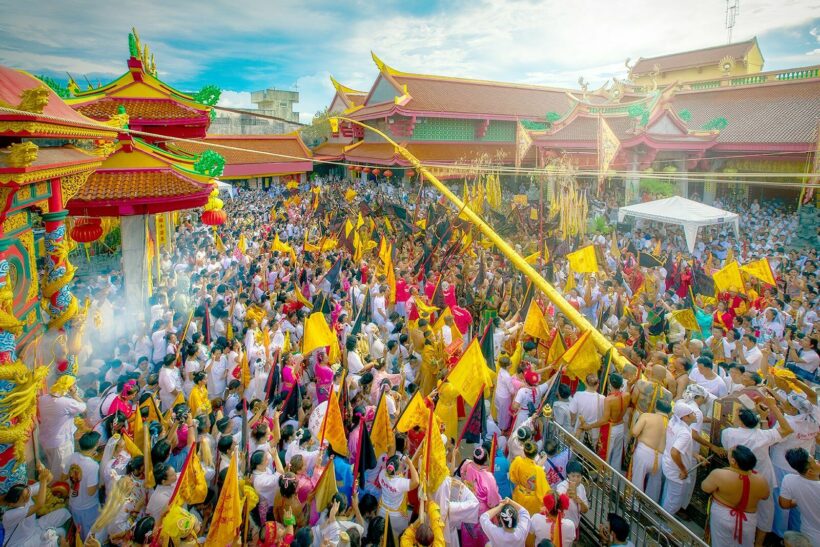 Get out your protective eye-wear and ear muffs. It’s THAT time of the year on Thailand’s southern island.

Phuket’s Vegetarian Festival kicks off next week, but under the remaining Covid restrictions that limit the size of crowds, etc, etc on the island. The Vegetarian Festival, aka. Nine Emperor Gods Festival, is an annual commemoration inviting ancient Chinese spirits to come down from the heavens to witness nearly 8 days of rituals and parades.

But officials worry this year’s festivities may not receive their usual attendance or people will be attending for shorter periods and avoiding the crowds. Bottomline, less money will flow into organisers coffers this year. Organisers speculate that fewer people will attend because of the fears of mixing in large crowds, the economic impact of the pandemic on their disposable income and the difficulties that still limit travel to the island at this time.

The University of the Thai Chamber of Commerce has predicted revenue to drop by at least 14.5% this year to around 40 billion baht.

The Thaiger’s Caitlin Ashworth visited the last pre-Covid Vegetarian Festival in 2019. Warning! Don’t watch if you are a bit squeamish or just had your lunch.

This year’s festival will run from October 6 – 14.

The dates for each year’s festival change as it’s scheduled from the Chinese lunar calendar. Last year’s festival was a more subdued affair due to Thailand’s Covid situation. In 2016 and 2017 the event was also heavily impacted by, firstly, the passing of Thailand’s King Bhumibol, and then, a year later, with the funeral of the former monarch.

For anyone who has never witnessed the festival, it’s going to take you by surprise – fire walking, loud street processions, led by possessed Mar Song and accompanied by copious fireworks, people walking with small and large (like spears and petrol pumps) objects pierced through their cheeks. And then there’s the final procession through Phuket Town where any unused fireworks get used up in a stunning assault on all the senses as participants, and the thousands watching, send the Chinese spirits back to the heavens after their week or so mixing it up with Phuket’s mortals.

The festival also promotes a week of abstinence from eating meat, drinking alcohol and indulging in a other ‘pleasures of the flesh’ for the island’s strong Thai-Chinese population. Phuket Town’s streets will be lined with stalls serving vegetarian food.

The Thaiger will have a full schedule of the events if you’re heading to the southern holiday island for the festival in the next few days.

HiuMak
2 hours ago, Thaiger said: Get out your protective eye-wear and ear muffs. It’s THAT time of the year on Thailand’s southern island. Phuket’s Vegetarian Festival kicks off next week, but under the remaining Covid restrictions that limit the size…
harry1
3 hours ago, Paco said: Many places closed for months.. because of covid. Let's do a festival.. but you may not celebrate your birthday with a your friends ( what they call a crowd)... let me guess this is allowed,…
BIGGLES
No good for me, being a red wine drinker and meat eater. I'll  continue to do my bit, and drink the odd case of red or two, and smoke a Romeo & Juliet cigar. A Chinese inspired festival I believe, …
Jason
Instead of having one large festival, it could have been better organised to have smaller groups gathering in each village. Surin, Kamala, Ban Rim Pa, Karon, Hat Yai, Rawai etc. Smaller groups and spaced out.

Lowseasonlover
17 minutes ago, Jason said: Instead of having one large festival, it could have been better organised to have smaller groups gathering in each village. Surin, Kamala, Ban Rim Pa, Karon, Hat Yai, Rawai etc. Smaller groups and spaced out.…