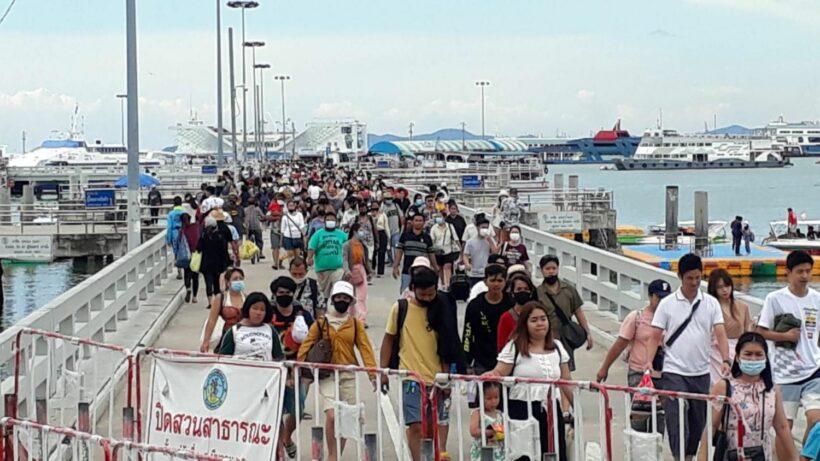 The extended 4 day holiday weekend circulated 8.8 billion baht in revenue after months of limited travel due to the coronavirus pandemic… the upbeat report from the Tourism Authority of Thailand. The drop in international tourism has crippled local economies dependent on the industry. The holiday weekend was a major boost. The Friday and Monday public holidays were announced as Songkran replacement holidays.

Many were off work last Friday and Monday as substitute holiday time for Songkran. The Thai new year water celebrations were cancelled in April due to lockdown measures. This weekend, hoards of people headed to Koh Chang, jamming up traffic on the mainland as people waited to hop on the ferry to the island. Cars sat for about 3 hours in a line that stretched for about 2 kilometres.

Prachin Buri’s Na Di district had over 4,000 tourists flocking to the rivers and waterfalls. All of the 300 inflatable rafts from the area’s 6 operators were booked over the weekend. Many tourists also crowded the province’s Khao Yai National Park.

Pattaya was also reported to be a lot busier than it had been in recent months, although the 4 day respite will do little to provide a long-term solution for the sea-side party town.

TAT governor Yuthasak Supasorn say they met their revenue goal for the holiday weekend, adding that TAT has been pushing their campaign “Rao Thiao Duay Kan” to encourage Thai nationals to travel as much as possible.

“The TAT will promote weekday travel and improve Rao Thiao Duay Kan…We want to make it more convenient for people to travel.”

The Transport Ministry reports 7,968,080 trips were made over the holiday and 11,215,836 entered and exited Bangkok. But with many cars on the road, there were a number of crashes and collisions reported.