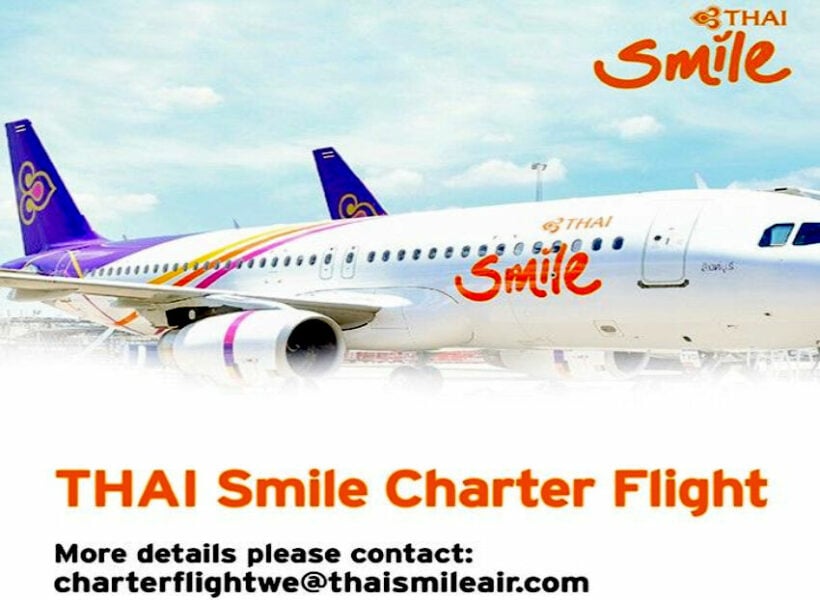 PHOTO: Thai Smile leads the approval of charter flights to and from Phuket. (via ThaiSmile.com)

A new chance for travel out of the Phuket Sandbox was just approved as the Civil Aviation Authority of Thailand announced they will allow airlines to schedule charter flights between Phuket to Bangkok. The permission granted comes after Thai Smile petitioned the government to allow a flight on August 14 to assist people who travelled into the Phuket Sandbox, but then found themselves in a bind when Covid-19 flared around the country and partial lockdowns and domestic travel restrictions began to blanket the country.

The decision from the CAAT to allow the flight and open the door to other charter flights relieves the situation where Sandbox travellers who scheduled a flight out of Bangkok Suvarnabhumi Airport and now couldn’t fly to meet their international flight. There was a bus service launched to transport people on the roughly 12 to 13-hour drive from Phuket to the Bangkok airport, but it’s a feeble substitute for the hopper flight that takes less than an hour and a half.

In order to follow the Centre for Covid-19 Situation Administration disease control measures, the CAAT announced all domestic flights to or from any destination in a designated dark red zone should be grounded. But exceptions were made for Sandbox programs like Phuket and Koh Samui, allowing feeder flights that connected the Sandbox areas reopened to international tourists to the air traffic hub of Bangkok in order to shuffle international travellers in and out of Thailand.

The exception made for Sandbox flights didn’t stop many airlines from cancelling flights to and from Phuket, as they suspended their entire fleet of flights and didn’t have passenger numbers to justify regular service with large planes. The CAAT announcement allows airlines to circumvent normal scheduling and request for special charter flights to land or depart at the Phuket airport.

The only options to leave Phuket to the Bangkok area now are the long bus ending soon, or Nok Air’s scheduled flight to U-Tapao Airport outside Pattaya, several hours away from Bangkok. The option for charter flights will allow airlines to schedule one-off flights directly to Suvarnabhumi when there is enough passenger demand.

The first of these flights will be a Thai Smile flight at 2:30 pm on August 14, arriving in Bangkok at 4 pm, and costs 4,300 baht including all taxes and fees and 20 kilogrammes of baggage. The flight is booked by a special Google Form with payment made to a WE account.

King Cotton
3 hours ago, Nsfran said: Interesting, let see if they can get regular charters out of Phuket. Sandboxing in September...hope they get something organized.  Yes, let's hope so . . . and thanks for this, your debut post! Hello, Nsfran and…
Hski
This whole thing sounds more of a nightmare the more you read about it. About to cancel my December flights. Will come back when the test and rules have gone...

Soidog
Maybe I’m still not looking at this the wrong way. Why would someone, who flew in to Phuket on an international flight (to my knowledge you still can’t transit via BKK in to Phuket?), and then wish to have a return…