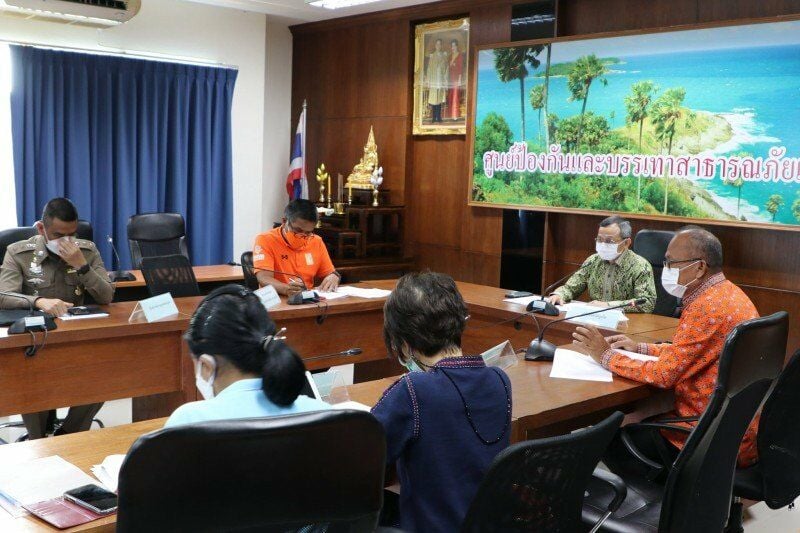 Phuket disaster officials are working on a public awareness campaign to try to reduce road accidents, especially with an expected influx of tourists after Thailand’s reopening on November 1. The plans were drawn up in Phuket Town at the Department of Disaster Prevention and Mitigation Center Region 18 headquarters during a meeting of the Phuket Road Safety Committee.

The meeting was called to discuss efforts to reduce and prevent road accidents in Phuket, especially during several upcoming holidays. The meeting was chaired by the Phuket Provincial Office Chief Administrative Officer who said that with travel restrictions relaxing, more and more people will be visiting the province which increases the likelihood of road accidents and death.

With more cars and motorbikes on the roads, the chief is calling for advanced preparation to increase road safety and prevent as many accidents as possible.

The committee decided to print and distribute 17 vinyl banners that will be hung and displayed in noticeable places around the province. The banners will be distributed to 17 local administrations and municipalities to cover their areas. Those local authorities will be instructed to hang the signs in places easily spotted from the roads where local people and drivers passing through can see them. The signage will warn people to drive more carefully.

The meeting also addressed what are referred to as “black spots” that are risky areas prone to crashes all over the island. The Chief Administrative Officer said that relevant agencies are working on the problems and have been instructed to speed up their solutions.

Last year, officials recorded 16,965 road accidents on the island with 16,859 injuries and 106 deaths total. So far this year the island has seen 10,715 accidents, with 10,652 injuries and 62 deaths, despite the drastically reduced number of travellers and tourists in the area, according to the Thai Road Safety Committee.

This year has seen 722,882 people who have suffered from injuries in road accidents and 11,131 deaths total across the entire country.

Thaiphoon
21 hours ago, Thaiger said: Phuket disaster officials are working on a public awareness campaign to try to reduce road accidents, especially with an expected influx of tourists after Thailand’s reopening on November 1. The plans were drawn up in…
Jason
I have no knowledge of the licensing laws and testing regimes are in Thailand for Thais. In my own country, it's highly regulated and enforced (that still doesn't stop all accidents). Try 100 hours as a learner (log booked on…

palooka
15 hours ago, Thaiphoon said: If they're serious about reducing road accidents, start with enforcement of existing laws governing moving motoring offences such as driving on the wrong side of the road, overtaking where not permitted, jumping red traffic lights,…

gummy
23 minutes ago, Jason said: I have no knowledge of the licensing laws and testing regimes are in Thailand for Thais No worries, not many Thais have either hence the number of accidents 😂

palooka
21 minutes ago, Jason said: I have no knowledge of the licensing laws and testing regimes are in Thailand for Thais. In my own country, it's highly regulated and enforced (that still doesn't stop all accidents). Try 100 hours as…

First flight from Russia lands in Phuket today with 275 travellers