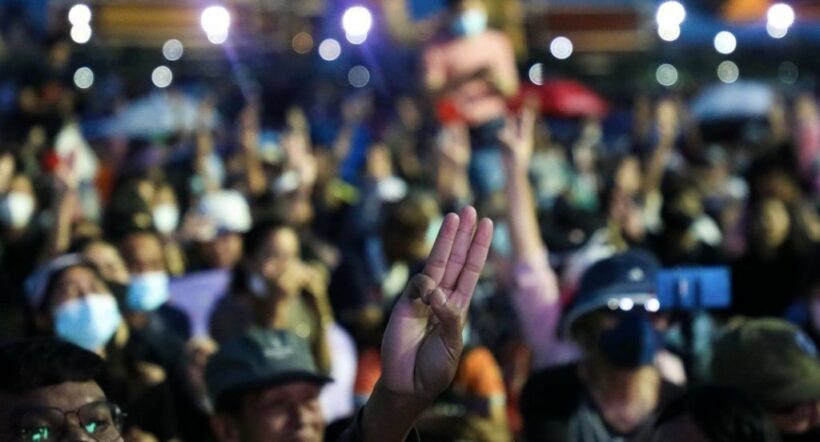 The pesky issue of student’s Numbers 1s and Number 2s has become a potential problem for protest organisers. Toilets might be hard to find at tomorrow’s pro-democracy rally. Activists say the Bangkok Metropolitan Administration is refusing to provide mobile toilets for the rally at Bangkok’s Democracy Monument. (Although in the past, protest organisers have arranged the toilets for their events.)

Move Forward Party MP Amarat Chokepamitkul has made many posts on Facebook about the administration’s alleged refusal to provide mobile toilets for protesters, saying they are bowing to dictatorial power rather than doing its duty to serve the people.

“We will use the sidewalk as a toilet … If you take off the sewer lid, it becomes a toilet.”

Protest organiser Pakorn Pornchewangkurn says his team will be are looking at other toilet options, making sure there are facilities available for the disabled and elderly, and says they expected “desperate tricks.”

At the September 19 protest, police apparently made it difficult for toilet truck drivers to enter the protest sites, according to the news site Prachatai.

The rally will start at 2pm at Bangkok’s Democracy Monument on Ratchadomnoen Avenue and activists will march to the Government House to call on the removal of PM Prayut Chan-o-cha as well as an end to the military-run government and a new charter, according to activist leader and human rights lawyer, Arnon Nampa.

No end time has been announced. Thammasat University students have asked for 3 days off school to participate in the protest.

Bangkok office rents drop for the first time in 10 years