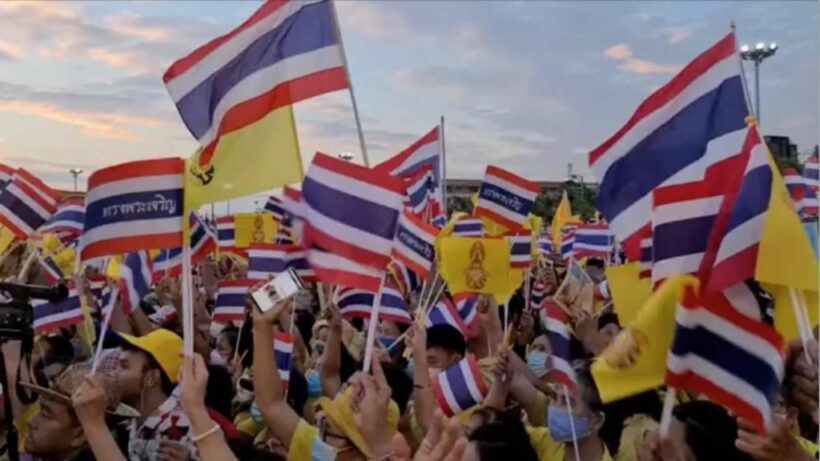 Thousands of royalist supporters and pro-government factions have come together in Chon Buri to show their support for the Thai Monarchy. Actor brothers, Bin and Ekapan Bunluerit, were also present at the rally on Chonlamark Vithee Road, as well as the mayor of Pattaya, Sonthaya Khunplome, and his brother, Wittaya Khunplome.

The governor of Chon Buri, Phakthorn Thianchai, was also in attendance, having brought a display of flowers to honour Their Majesties, the King and Queen. Later in the evening, he took delivery of a message of support from host Somchai Kiratiyaphong, before passing it to government officials. It’s understood the message will be delivered to the palace so that the Royal Family can acknowledge the loyalty of Chon Buri residents and those from nearby provinces.

Participants held up pictures of Their Majesties, the King and Queen of Thailand, as well as portraits of His Majesty, the late King Bhumibol Adulyadej. They waved Royal and Thai flags, chanting, “Long Live the King”, as they marched to Chon Buri City Hall. At 6.00pm, a message of loyalty to the Monarchy was read out on stage, with the crowd then lighting candles in tribute to Their Majesties, the King and Queen.

According to a report in The Pattaya News, actor Bin Bunluerit has called on the people of Thailand to come together and show love and loyalty to the Monarchy. It’s understood both he and his brother plan to take part in further pro-establishment events around the Kingdom.

The Chon Buri gathering comes amid ongoing political unrest, with Thailand divided across political and generational lines. Tomorrow, anti-government protesters will hold a rally in Bangkok, where they will repeat calls for reform of the Monarchy, as well as the resignation of PM Prayut Chan-o-cha, and a re-write of the constitution.

Singer and political activist plans to fight on, while sticking to bail conditions