The Thai LGBT community was joined by anti-government protesters in yesterday’s Pride Parade in Bangkok, which travelled from Sam Yan intersection to Silom. The parade took on a more political tone this year and was calling for democracy and equal rights, amid the usual demands for the resignation of Thai PM Prayut Chan-o-cha and reforms to the role of the monarchy. Some 2,000 people had joined the march by the time it reached Silom.

The parade was titled “Parade of the Proletarians”.

The usually colourful pride parade took on a more sombre tone as the “Seritoey Plus”group of black-clad people gathered at Sam Yan intersection around 3.30pm. Many of the marchers were dressed in black. The protest disbanded peacefully at 9pm.

Once the demonstrators reached Silom Road  there were a series of speeches and performances to explain their demands. 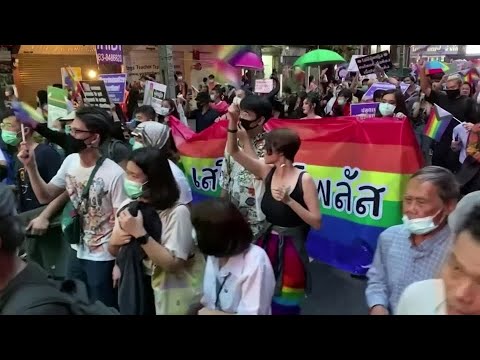 Members of Thailand’s LGBT Community have been regular participants at the rallies since the latest movement kicked off in July this year. They have brought a bit of colour to the otherwise drab protest attire.

The march’s organisers say the objective of the gathering was to stimulate the economy brought to its knees by the Covid-19 outbreak and the mismanagement of the current government.