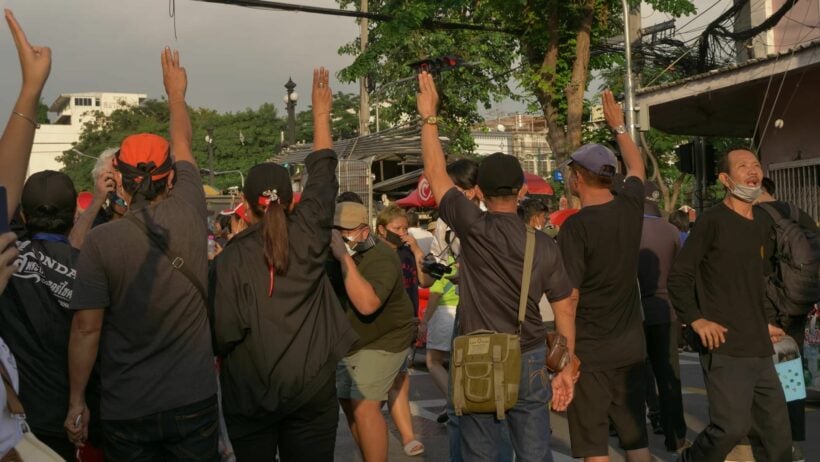 Activists from Khana Ratsadon 2563 (People’s Party 2020) say they will not surrender and will continue to fight what they term, “the dictatorial power and its feudal followers”.

“Khana Ratsadon (“People’s Party”) was a Siamese group of military and civil officers, and later a political party, which staged a bloodless coup against King Prajadhipok’s government and transformed the country’s absolute monarchy to constitutional monarchy on 24 June 1932.” – Wikipedia

“In the early morning of October 15, government officials arrested 4 rally leaders – namely Parit Chiwarak (“Penguin”), Arnon Nampa, Prasit Utharoj, and Phanuphong Jadnok. It is an unfair act since the right to gather is allowed under the democratic regime and is considered one of the basic rights of all humans.”

“The declaration of state of emergency is not for the sake of the public but is merely a government ploy to obstruct pro-democracy movements and keep control on their power.”

“We will continue our rally at 4pm on Thursday at Ratchaprasong Intersection. If you are a pro-democracy person, please come out and join us to take down the dictatorial power and its feudal followers.”

The announcement has been shared on Facebook by the Free Youth Group. Immediately following the announcement, Police arrested one of the key protest organisers in her hotel room.

PM Prayut Chan-o-cha declared a State of Emergency for Bangkok from 4am this morning, in an effort to quell growing anti-government protests in the capital. Around 10,000 activists had set up camp at Government Houseearly last night. But, following the announcement of the emergency decree and the arrival of 100s of riot police just after 4am, they were forced to disperse. Many people continue to be arrested today in the wake of yesterday and last night’s protests.