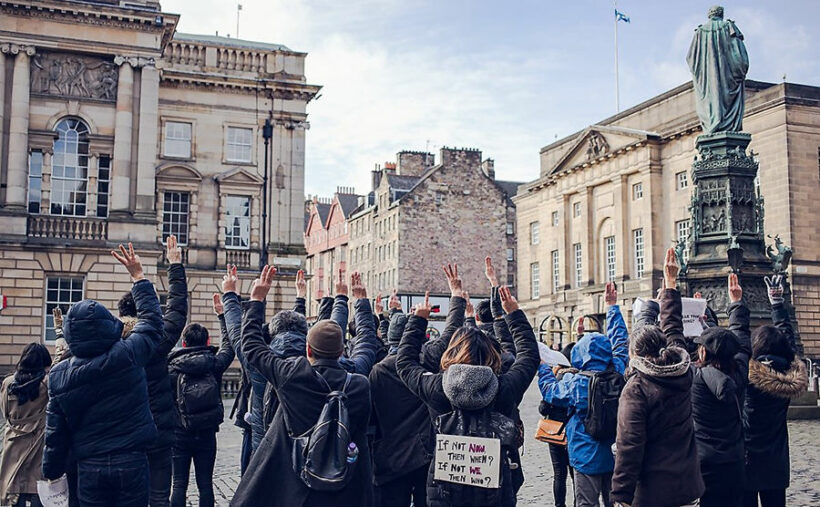 PHOTO: Thais Rise Up in Scotland/Twitter

As anti-government protests continue in the Kingdom, similar rallies are taking place overseas, driven by Thai nationals living abroad. The Bangkok Post reports that a Scotland-based group, known as Thais Rise Up, is planning a rally in Edinburgh on August 29. In solidarity with its fellow citizens in Thailand, the group is calling for the Thai parliament to be dissolved and the formation of a Constitution Drafting Assembly, made up of people from all sectors of society. The group has already held an online protest on social media, with members sharing photos of anti-government banners, in support of the protest at Bangkok’s Democracy Monument on August 16.

Also in the UK, around 50 Thai nationals gathered at Russell Square in London, on August 16, in support of activists in Bangkok. It’s understood the protesters are members of a group known as the Thai Student Network in the UK for Democracy.

Meanwhile, Thai nationals in Taiwan have also rallied in support of political activists in Thailand. According to the Taiwan Alliance for Thai Democracy, the gathering took place at Taipei’s Main Station, with around 150-200 people in attendance. The group agrees with the political demands of student activists in Thailand but opposes what it sees as the Monarchy being used as a political tool, saying the institution should be left out of politics.

Some Thai nationals in Taiwan say activists in both Thailand and Taiwan, as well as pro-democracy groups in Hong Kong, should form an alliance to fight political authoritarianism in the region.