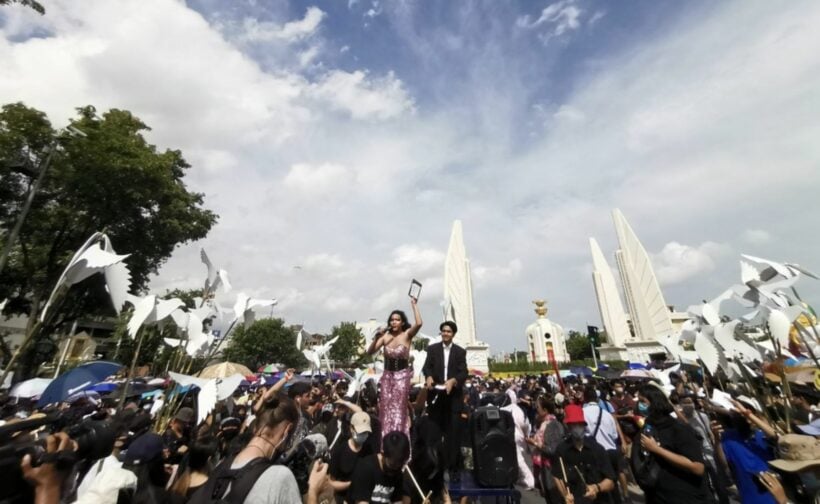 The protests have been popping up around Thailand, and overseas. Support of the pro-democracy demands by students and activists has spread beyond the borders of Thailand. A group, calling themselves ‘Thais Rise Up” in Scotland says they are holding their own rally at the end of this week in Edinburgh with same demands – to call for the dissolution of the Thai parliament and a review of the Thai constitution.

The group has already held a virtual protest on Facebook where participants posted photos of anti-government banners in support of large protest at Democracy Monument on August 16, which attracted up to 10,000 people.

Again on Facebook, the Taiwan Alliance for Thai Democracy posted that it held a rally in support at the Taipei Main Station last night. Taiwan News reported that 150-200 people joined the event. The group noted that it opposed bringing the Thai monarchy into the list of demands as a tool for political gains. They stressed the need for the “higher institution” to be excluded from politics and the protests.

The Taiwanese group say the protest was organised to show their solidarity for those that support democracy and called for activists and lawmakers from Taiwan, Hong Kong, Thailand, and others to forge a Pan-Asian alliance to counter authoritarianism in the region. South east Asia has a poor record of successful democratic governments.

The ‘Thai Student Network in the UK for Democracy’, posted that around 50 Thais gathered at Russell Square in the middle of London on August 16 in support of the Thai protesters.

“In our generation, we must end this toxic relationship between Thai people and the ruling regime in Thailand.”

More protests are being planned around Thailand in the next few weeks.

Editorial HERE about how the Thai government is coping with the demands of the protesters.