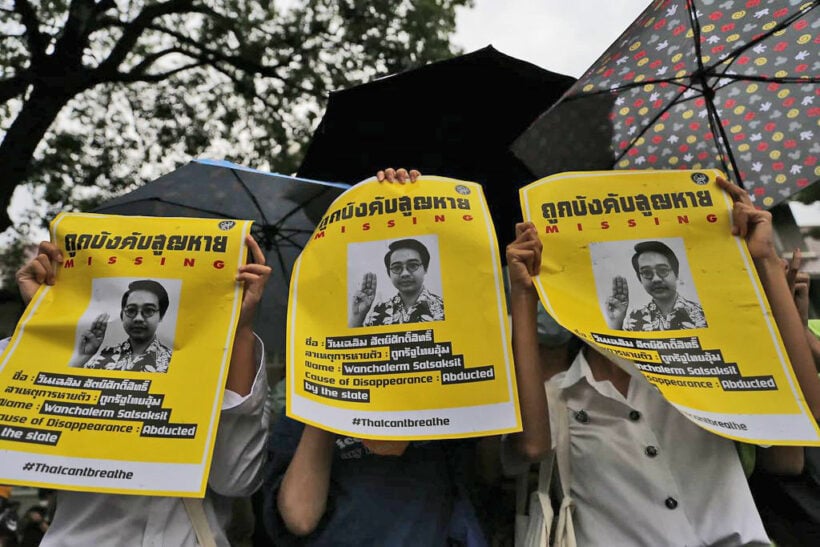 Despite a UN deadline, the family of abducted activist Wanchalerm “Ta” Satsaksit says that authorities have yet to offer any explanation of his fate. He is believed to have been kidnapped in front of his Phnom Penh apartment on June 4. His sister, Sitanan Satsaksit says she has yet to hear any word from either the Cambodian or Thai governments nearly 2 months after her brother went missing, despite calls from various civil rights groups for the 2 countries to investigate the case.

“Neither the Thai side nor Cambodian side has updated us. There is no indication that they have done any investigation.”

Sitanan says she’ll continue to wait for a reply from the UN’s Committee on Enforced Disappearances, which must go through a bureaucratic process in Geneva. Phone calls to the United Nations High Commissioner for Refugees in Thailand, whose oversight includes political exiles, were directed to send emails, which have so far gone unanswered.

“I’ve tried to make peace that he’s dead. If I could get his body back to hold a funeral, that would be wonderful.”

Wanchalearm is an anti-military activist who fled the May 2014 coup that deposed elected PM Yingluck Shanawatra and installed a military junta, to Cambodia, where he spent the following years criticising the government and the monarchy online.

Following his disappearance, the UN Committee on Enforced Disappearances heard Sitanan’s request to find her missing brother, and sent a letter to the Cambodian government demanding explanation, with a deadline to reply within 2 weeks. The deadline has now passed without any further action.

48 year old Sitanan says authorities did ask her to fly to Cambodia to act as a witness, but she would have to fly at her own expense as well as go into state quarantine. She says Cambodia refused a meeting via video conference.

“I used to ask him, Ta, why do you do this? It’s not safe. But after he’s gone, I feel that he sacrificed himself. Democratic activists, not just Wanchalerm, are willing to sacrifice their futures, opportunities, and lives with their family.”

Sitanan says her mother has provided DNA samples to the Central Institute of Forensic Science in case they’re needed to identify Wanchalerm’s remains. Since his disappearance, she says, she’s been burdened with legal fees.

UNHCR spokeswoman Praya “Puu” Lundberg has come under fire for her refusal to speak out for Wanchalerm. On her Instagram page she wrote:

“I promote peace and non political agendas this; is highly political. It’s not my place to and not my fight. If you want me to fight for a broader issue I can, like racism.”

Sitanan says she’s not angry at Puu, since many of her own friends vanished from her life after her brother’s disappearance.

“It’s not just Puu that’s scared, even my own friends are scared and refuse to have anything to do with me. Am I mad? No. Some people are just really afraid. We don’t know who’s watching us.”