Thailand is now abuzz over the issue of plastic pollution. This topic is now being widely discussed among Thai netizens, who have been suggesting many measures, including controlling the use of plastic bags at supermarkets and convenience stores.

But so much of daily Thai life still revolves around single-use plastics it is taking radical changes in behaviour and habits to make the substantial changes necessary.

The Nation took to the streets to see if there was any correlation between the big savings some of the larger companies are claiming and the ‘real life’ demands of shoppers and plastic bags.

The owner of 7-Eleven convenience stores, CP All, were asked about their measures and results. They claim they have enforced a strong policy to reduce the use of plastic over 10 years. Its campaign, “reduce plastic bags every day, you can do it”, has saved the company the cost of 646 million plastic bags, and this money saved is being donated to hospitals for medical equipment. As of August 29, CP All said it has donated 126 million baht.

But even this campaign (honestly, I haven’t noticed any move towards limiting plastic bags at 7-Eleven stores), is just a tiny tip of the iceberg.

A test at a 7-Eleven opposite Central Plaza Bangna for an hour from 10am showed that 27 customers still demanded plastic bags, while 23 people who bought either cigarettes, bottled water or coffee rejected plastic bags. Only three people were seen bringing their own bags.

Over at Amazon Café, they say the number of clients who bring their own cup for coffee has risen from around 1.8 million in January 15 to 2.2 million by August 15. In about seven months, Amazon coffee shops were reportedly able to reduce the use of 16.7 million plastic cups, averaging at 2.2 million cups per month.

We doubt those claims. The Nation report that when they monitored the Amazon Café near Interlink Tower in Bangkok during lunch break for an hour, not a single person had brought their own cup to the coffeeshop. This is even though staff insisted that 20 to 30 regular clients brought their own cup for a 5 baht discount.

The Thaiger are also regular customers of Amazon Cafes and have NEVER seen anyone coming in with their own mug. (The Thaiger usually drinks their coffee in-store in a china cup.)

Tesco Lotus began campaigning for customers to “say no to plastic” since 2015 and even introduced a variety of incentives such as reward points. As of August this year, Tesco had implemented a policy of not giving out plastic bags for purchases of one or two items at all its 1,800 hypermarkets.

Again, a ‘useful’ campaign which is as much about good PR for Tesco as it is about any realistic limiting of plastic bag use.

The Nation did more on-the-ground testing. On August 31, The Nation decided to count the number of customers at Tesco Lotus and 7-Eleven who rejected plastic bags. The test at Tesco Lotus (Seacon Square) ran for an hour from 12.45pm, and we found that 453 shoppers still asked for plastic bags, while only 29 either rejected a plastic bag or used their own cloth bag.

After learning about The Nation’s tests, Tesco Lotus announced on September 2 that all express checkout lanes at 200 of its hypermarts will become “green lanes” and will not give out plastic bags. It said its goal is to close the loop on packaging, not to just limit single-use plastic bags. 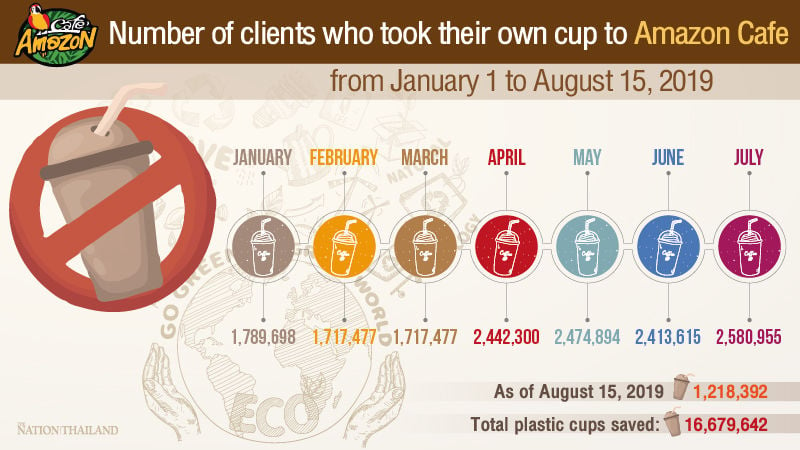 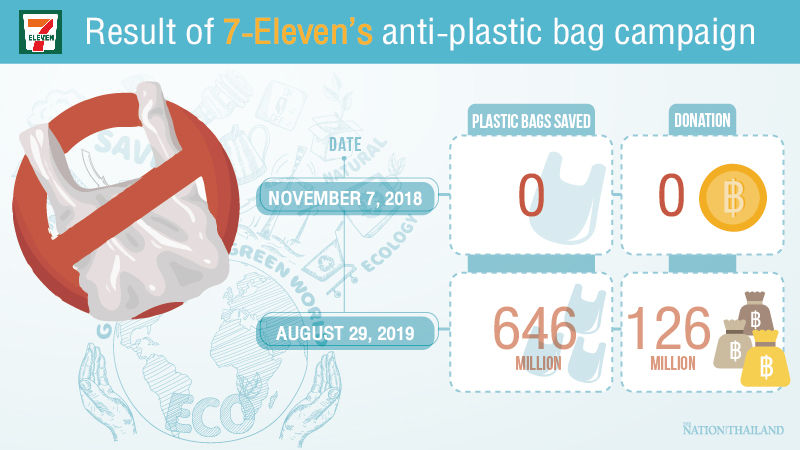 For their part, the government recently announced that by the end of 2019, Thailand will stop producing three types of plastic – microbeads, cap seals and oxo-degradable plastic. It also aims to stop single-use plastics by 2022.

Though the joint effort by the Natural Resources and Environment Ministry and the supermarket network has reduced more than 2 billion plastic bags or 5,755 tonnes of plastic valued at 400 million baht since July 21, 2018 to August 31, 2019, experts doubt if this is enough to make a useful dent in the piles of plastic floating around streets and in the oceans around Thailand.

Anusorn Tamajai, dean of Economics Faculty at Rangsit University, said that the government must come up with both short and long-term measures to tackle the pollution problem, and suggested the introduction of pollution tax.

Another suggestion is to impose the “polluter pays” principle, in which the producer of the pollution must cover the cost of damaging people’s health or the environment.