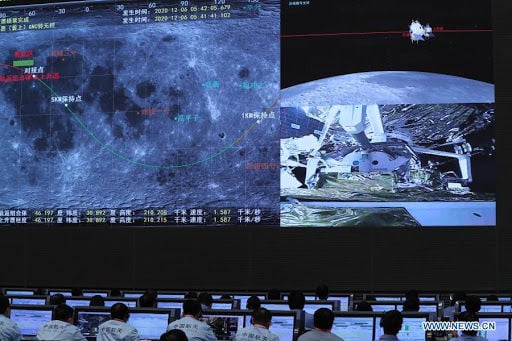 China has carried out its first-ever lunar orbit docking today with a probe carrying lunar samples collected over the past week during a 48 hour stay on the Moon. The mission is named Chang’e-5, after a mythical Chinese Moon goddess, and is bringing back the first lunar soil samples in over 40 years.

The capsule carrying moon rocks and soil lifted off from the lunar surface last Thursday and docked this morning with the orbiter, according to the country’s state media and China National Space Administration.

The cargo capsule also marked the first liftoff from an extraterrestrial body by a Chinese-owned craft. The capsule transferred the moon samples to the orbiter which separated to make the long journey back to Earth.
The venture has zeroed-in on Mons Rümker, a volcanic complex in a nearside region known as Oceanus Procellarum. The region faces the Earth – the same face that is always presented to our planet. The lunar lander examined its surroundings and gathered surface materials by using a spectrometer, radar, drill, scoop and camera.
China is apparently looking to catch up with Russia and the US after taking decades to match their achievements. The government has reportedly spent billions in this effort by the military-run space programme. In a symbolic move, the space agency said that before liftoff, the Chinese flag was raised on the moon’s surface, signifying a victory for the country and joining the other flags placed before theirs.
Scientists say they hope the samples that they have collected will help them learn more about volcanic activity on the moon’s surface as well as more about the origins of the Moon. China will become the third country to have received samples from the Moon, if they are indeed successful in returning the rocks back to Earth. Yet, the delay in joining the US and Russia has been long, with their samples being collected from 1969 up to 1975, before the ‘race to the moon’ lost steam and government funding dried up.
SOURCE: Bangkok Post

The 2020 Supersports Laguna Phuket Marathon has been run and won, despite all the challenges