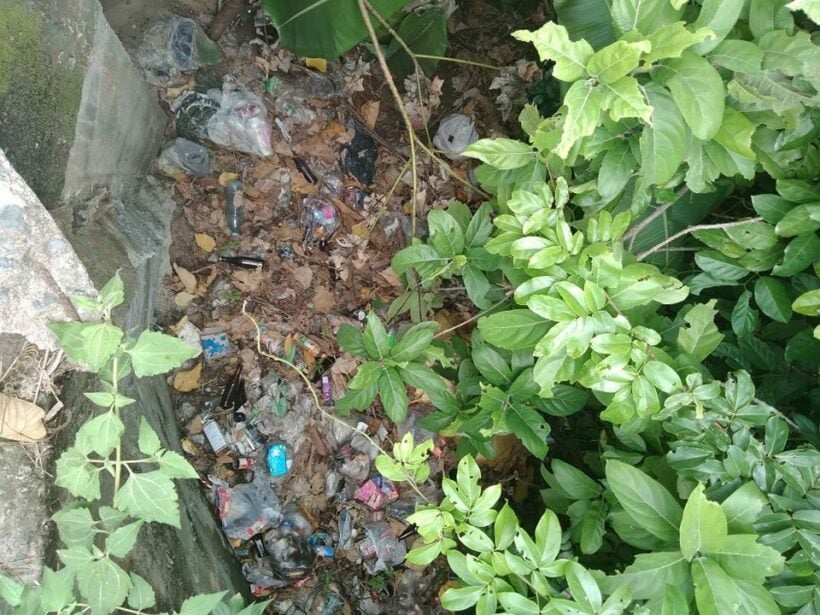 Rubbish thrown under a small bridge in Koh Samui

No one can argue with the appeal of visiting Thailand’s exotic, tropical islands. With their glistening palm trees, crystal-clear waters, and powdery, white sands, a trip down south is what many yearn to cross off their bucket lists.

One of Thailand’s most iconic islands is that of Koh Samui. As the largest and most developed island in the Gulf of Thailand, it is known for its upscale spas, yoga retreats and unparalleled beaches. However, upon arriving, many visitors say they are unenviably shocked by the amount of rubbish that has gone rogue throughout the island’s shores and roads. And, on second thought, this picture-perfect island may not be the tropical paradise that they had envisioned. 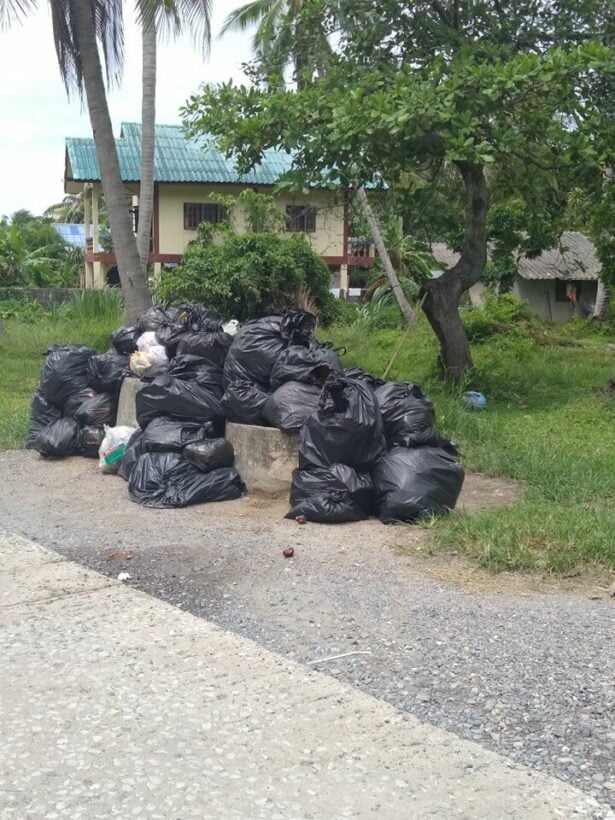 However, Koh Samui isn’t the only place to suffer from wayward rubbish that seems to have no home. Many tourists have said that when visiting Krabi and the surrounding islands on boat tours, they arrived to a shoreline filled with rubbish. But, Koh Samui is also one of those places that tourists would expect to be pristine, due to its international reputation of being a spectacular place to go on holiday. For those local Thais and expats that have chosen Koh Samui as their home, the island’s rubbish has become part of their daily scenery. Paul, a long-time expat, who wishes to keep his surname anonymous, says it definitely affects tourism.

“It’s disgusting. For those of us that live here, we see it every day and nothing is being done about it. Even my friends who have visited Samui, came off the ferry seeing rubbish floating at the pier. They ask why is there rubbish everywhere? Even coming from Koh Pha Ngan, where it is miraculously clean, they wonder why Samui is this way?” 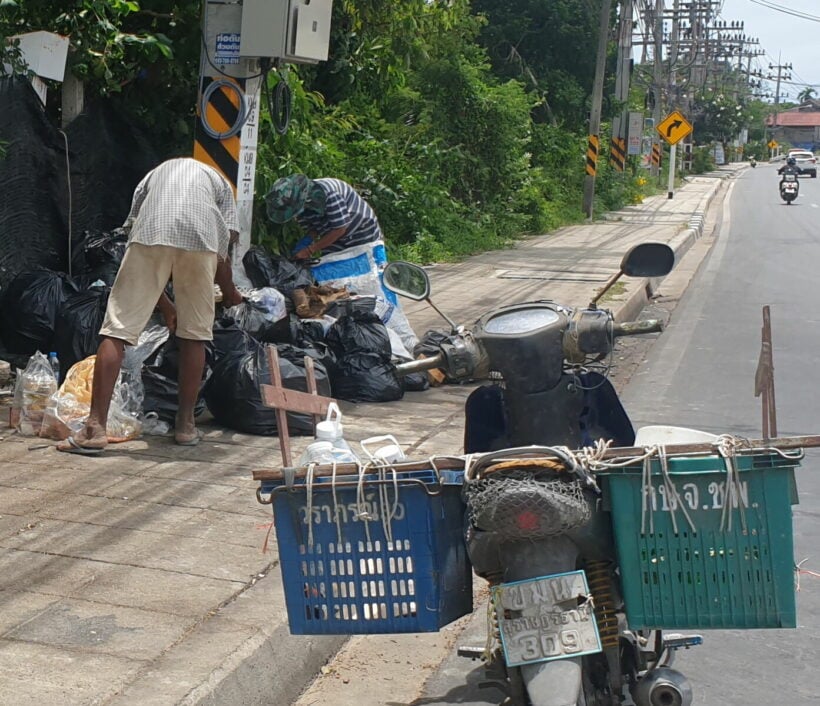 Another expat, who wishes to remain anonymous, says he is sad that the island, in which he calls home, is covered with garbage.

“For sure it has an impact on tourism-instead of attracting tourists, the island deters them by its omnipresent garbage. They stay for a few days and go somewhere else.”

Since Covid-19 ravaged the economy in Thailand, the tourism sector has been all but depleted. As a Bloomberg report indicates that tourism accounts for up to 20% of the economy, the effects have been a nightmare for both locals on the island and expats. Katewadee, a Thai woman who lives on Koh Samui, echoes what the news has reported.

“Many people have left. Over half of the population had to go back to their hometowns as there were no tourists.”

As tongues have wagged and minds have come together to save the island, one thing that many are concerned about is the amount of garbage that doesn’t seem to ever go away.

In 2020, the Thailand Development Research Institute reported that Thailand was the world’s 10th-biggest dumper of plastic waste into the sea. Furthermore, the country has an average of 1.03 tonnes of mismanaged waste each year, with nearly half flowing into the sea. Ocean Conservancy, a nonprofit environmental advocacy group, also reported concerning figures. It stated that Thailand produces 27.8 million tonnes of waste a year, with 7.19% being produced by local communities. Moreover, such local communities include those that are along the coasts and rivers.

In a report first published by The Bangkok Post, Greenpeace, an NGO, stated that Thailand produced more than 2 million tonnes of plastic waste a year. Crunching numbers reveals that these organisations claim that of almost 30 million tonnes of waste a year, 2 million of that is plastic waste, while half of that is mismanaged waste. The 2019 Greenpeace report indicated that between 2016 and 2018, the amount of imported plastic waste rose from 836,529 tonnes to 2,265,962 tonnes. 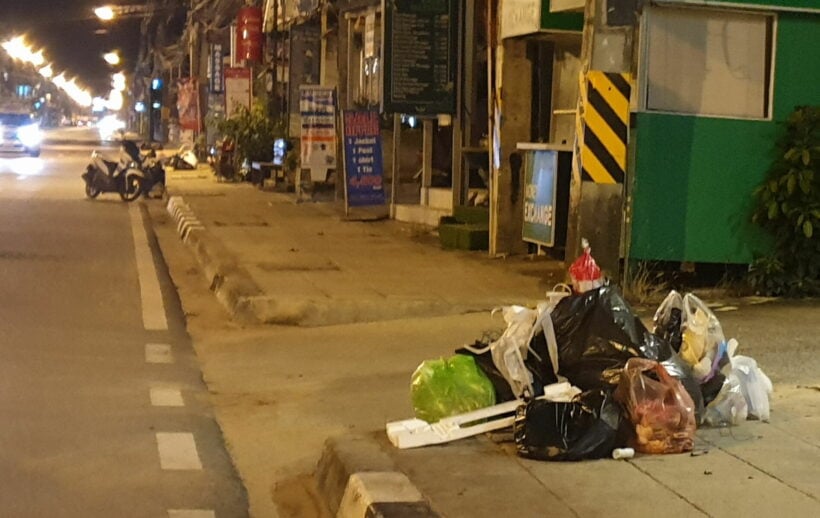 Those figures catapulted Thailand into the position of being considered the new outlet for foreign rubbish disposal. Even worse, weak law enforcement has seen shipments of illegal toxic and electronic waste arriving on Thai shores. Just last year, the Raja Ferry capsized off the coast of Koh Samui, carrying truckloads of plastic waste that unfortunately found a new home in the Gulf of Thailand.

Yet, despite the concerning statistics, together with a shortage of funds, the country relies on local municipalities such as Tessaban to organise and dispose of waste. Moreover, the country has a supply chain, called the saleng, which features rubbish scavengers working together with 30,000 registered shops to sell and buy recyclable waste.

Here on Koh Samui, a local organisation called Trash Hero concentrates efforts between locals and expats to clean up beach trash on the island and those neighbouring islands. John Fitton, the co-founder of EcoThailand, says Koh Pha Ngan, which is nearby Koh Samui, has 3 Tessabans that are proactive and progressively taking care of the island’s waste.

“One of the major issues Samui has is the lack of an incineration plant. There are options for good value waste to power generation capability, but the island doesn’t, yet, appear to take up the options.”

In the meantime, Thailand has been working to switch to a circular economy, which strives to rebuild capital. What this means, essentially, is that instead of losing something by throwing it into a rubbish pile, efforts are being made to reuse that item or rework it into something else.

Back in 2019, Thailand’s cabinet approved a Plastic Waste Management 2018-2030 roadmap that aims to reduce and stop the use of plastic and replace it with environmentally-friendly materials. This roadmap includes banning 3 types of plastic products in 2019 as well as 4 other types of plastics by 2022.

Another initiative, The Bangkok Declaration on Combating Marine Debris in ASEAN, has detailed the steps to be taken, in order to cut down on pollution. Those steps included recognising that an efficient, waste-sorting system at the local level is needed.

Part of the problem at the local level is that, historically, remote and vulnerable communities’ role in the management of rubbish has been ignored. The lack of waste management and infrastructure, like garbage bins and trucks to collect the waste was also recognised as a big issue in tackling the waste problem. The policy included the need for creating a circular economy instead of using more incinerators and landfills. But the progress, so far, has many wondering if these types of initiatives are just for show.

Around 5 years ago, Koh Samui had a meeting to decide on a plan that would address the mismanagement of waste on the island. And, that meeting produced an agreement between the island and Khon Kaen, to ship around 200,000 tonnes of waste to a Khon Kaen power generation plant. But, those in the know, say this is only a temporary solution. The meeting also resulted in hiring a private company to manage rubbish disposal within the island and move it outside of the area. 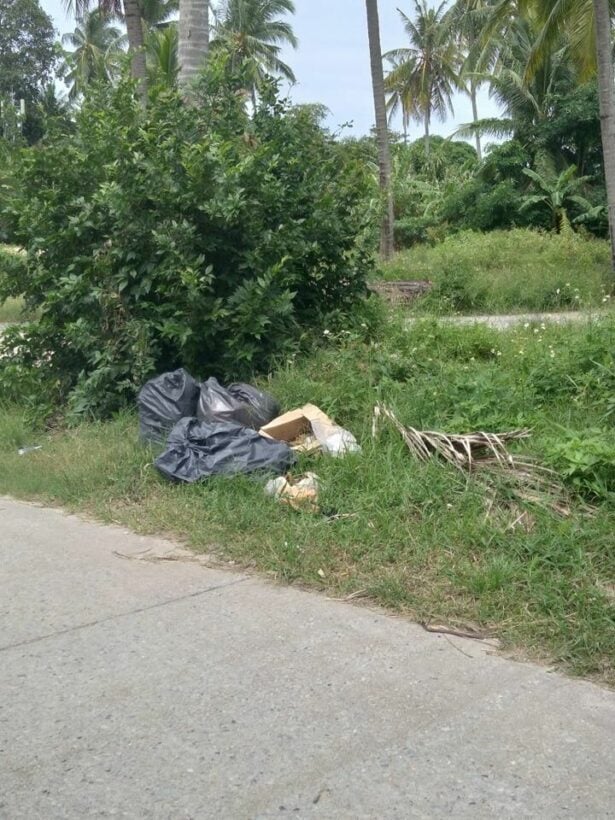 Fast forward to the present day, Katewadee and other residents say the problem is still glaringly evident. Katewadee says Tessaban is responsible for issuing rubbish bins to each household and collecting 40 baht per month to regularly empty the bins. But, upon a simple look around the island, many of the streets are bin-less.

As for Tessaban, The Thaiger attempted to contact a representative, however, at the time of publishing this article, no one was reached for comment.

Sadly, what’s in place of the bins, are piles of rubbish along the roads, which locals say is an eyesore for both residents and incoming tourists. Furthermore, the island’s street dog population (another issue in itself) is scavenging through the rubbish, spreading it all over the roads and grass.

Katewadee says Tessaban usually only picks up such rubbish on the main roads, leaving smaller roads to bargain with private workers at rates from 500-1,000 baht to pick up the trash. However, residents all over the island give contradicting answers when asked if their trash is being picked up regularly.

“Tessaban is located in Nathon, and it seems they service that area well but forget about the rest of the island. Tessaban should have a budget that provides bins for every house on the island, but we don’t see any bins around here, just piles of trash that are picked through and spread around by soi dogs.”

For its part, Tessaban does make 5 year plans to combat the rubbish on the island, and some residents say they remember seeing bins provided. However, they say they disappeared as they were either stolen or removed.

It is clear that for any type of national agenda to succeed, the government needs to make sure that local and coastal communities actively minimise waste at the source.

Another issue includes historically poor education. Katewadee says even with these initiatives, people litter because they either don’t understand the effects on the environment, or they simply don’t know where to take their rubbish.

Although the effects on tourism are important, the environment is the main victim of such mismanagement. Greenpeace says that 60% of marine animals die from eating plastic waste, while 70% of sea turtles die from plastic waste that binds to their necks and body.

One thing is evident in the fight to reduce pollution: nobody wins when pollution is mismanaged. For now, the environment continues to be the biggest receiver of humanity’s misdeeds. As many environmentalists keep pushing for a greener way to live, time is running out to preserve ecosystems. And Koh Samui is just one example of how waste mismanagement can have devastating effects for all types of the island’s residents.

For those on Koh Samui, you can click here for a list of recycling centres on the island (courtesy of Samui Green Market). The AIS store in Central Festival Shopping Mall is also reportedly taking batteries from the public for safe disposal.

Paulw
On 9/10/2021 at 7:30 PM, DWiener said: Dude, do you wear sunglasses and use a white cane on these walks?? Look closer. The beaches might look clean, but when you look at the rocks along the coastline there is plastic…
Paulw
Just now, Paulw said: I believe the reasoning in parts of Asia for no trash bins is that 1) they get set on fire and 2) they get bombs put in them !!

PapayaBokBok
23 hours ago, HolyCowCm said: I love the street and shop sandwiches there. Fantastic. Ever get your ears cleaned of ear wax? Sort of on subject as it is pulling garbage from your ears, just not on Koh Samui. Yep…