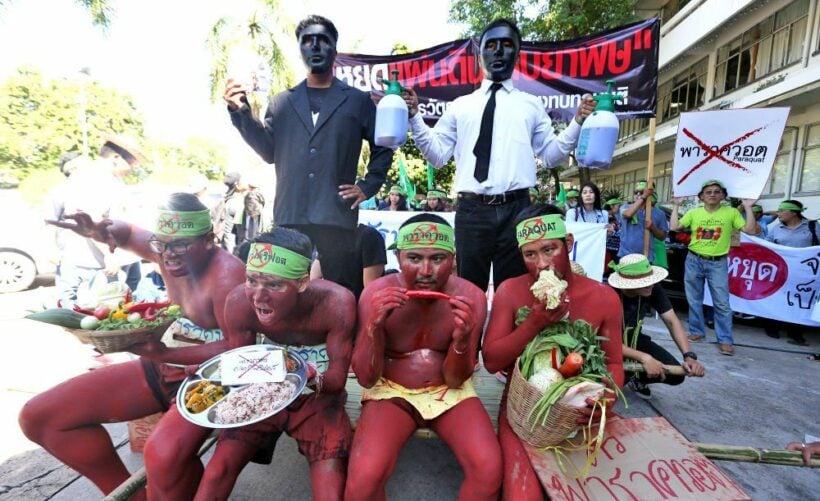 686 civic groups threaten to sue Industry Minister Suriya Juangroongruangkit over the U-turn on banning three agri-chemicals. Thai PBS World reports that the groups are all in favour of the ban on paraquat, glyphosate and chlorpyrifos, which the National Hazardous Substances Committee (NHSC) recently agreed to ban.

And then it changed its mind.

They say they are working with a group of American lawyers who are currently engaged in a class-action lawsuit against Monsanto, the US manufacturer. With the help of those lawyers, they say they will instigate legal proceedings against Thai government minister Suriya on behalf of those affected by the agri-chemicals in question.

On November 27, Minister Suriya, as the new NHSC chairman, adopted a resolution that effectively reversed the October 22 ban on paraquat, glyphosate and chlorpyrifos. Instead, it allows for a delay on banning paraquat and chlorpyrifos for six months, while allowing the use of glyphosate in controlled circumstances and without any time limit.

Suriya maintains glyphosate is safe and is used in 161 other countries, a claim the civic groups strongly disagree with, as they say his assertion is not backed up by evidence and goes against the World Health Organisation’s position on glyphosate.

They also dispute the assertion of the NHSC that the ban would violate a World Trade Organisation agreement that requires Thailand to provide 60 days’ notice of any ban. The groups say that where there is an urgent need for a ban on health grounds, an exception can be made on advance notification.