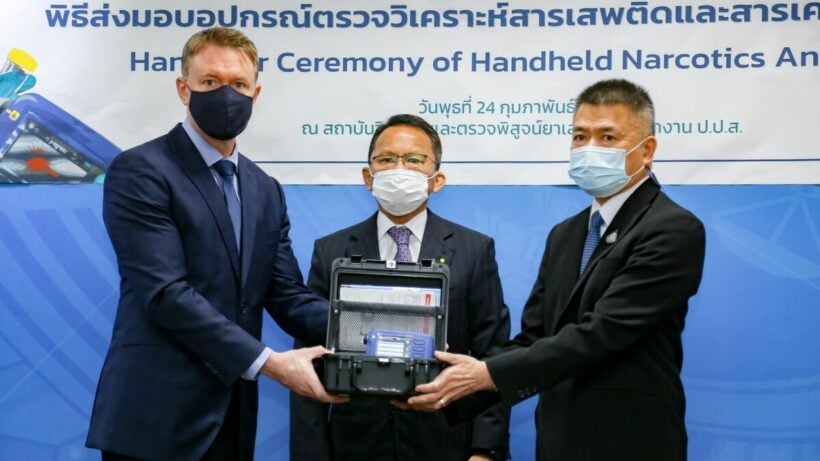 Thailand law enforcement will now use a new “laser” narcotics analyser to test suspicious substances and chemicals in major drug busts. It’s apparently a more accurate method to identify illicit drugs than the current colour test. The new portable drug test happens to come a few months after Thailand claimed to have seized 11.5 tonnes of ketamine in the “biggest drug bust ever” and then discovered the substance was actually a cleaning agent.

In earlier reports, Justice Minister Somsak Thepsutin said the mistake was a “technical error” and the testing fluid had turned “purple,” a positive sign for ketamine. Somsak didn’t mention the failed ketamine bust when announcing that a pair of “portable Raman spectroscopy analysers” had been delivered to Thailand from the United Nations Office on Drugs and Crime. He says the new tool is more accurate than the colour test.

“The new portable analysers utilise the Raman spectroscopy technique to identify suspicious drugs and chemicals in less than 30 seconds, and more accurately than the colour test method that we currently use.”

Not only can the device detect drugs, but apparently its laser can also detect additives like colouring and flavouring agents, according to Office of the Narcotics Control Board secretary general Wichai Chaimongkhol.

“The machine can detect chemicals either in powder, crystallised, tablet, capsule or liquid form… Its laser can penetrate transparent containers or wrapping of up to 2mm thickness and read the scattering of light to identify the substance accurately, reducing the risk of officials handling harmful chemicals while also helping preserve the evidence.”

The tool is planned to be used to identify suspicious drugs and chemicals that are smuggled across the border as well as at airports and seaports.