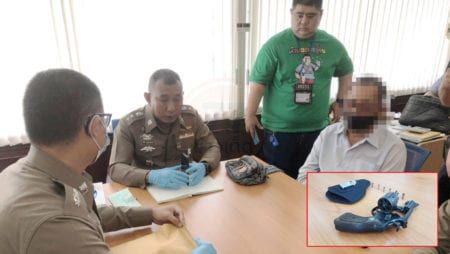 Somjet Pojaroen, a former assistant village headman who runs a motorbike taxi business, handed over his .22 revolver to police. He’s facing charges of possessing a gun without a license and discharging firearms in public.

The Big C recently opened up last month. About 10 days ago, a new group of win drivers set up a station in front of the shopping centre, just 50 metres away from a win station that has been around for years, a nearby resident says.

Pojaroen says the shootout started when a win driver from another group picked up a passenger in what Pojaroen says was “my area.”

“A few minutes later, (the driver) showed up with some 20 men and demanded an explanation. I saw he was armed with a gun, so I rushed to grab my gun from my backpack, when his group chased and fired at me. I had no choice but to fire back.”

Several shots were fired between the 2 groups. Police say 8 bullet casings on the ground and bullet holes were in a nearby parked car. No one was injured in the shootout.

“I decided to turn myself in to show that I was defending myself and have no intention to escape.”

Trials and tribulations 2. Returning to Thailand in the Covid era – a personal view