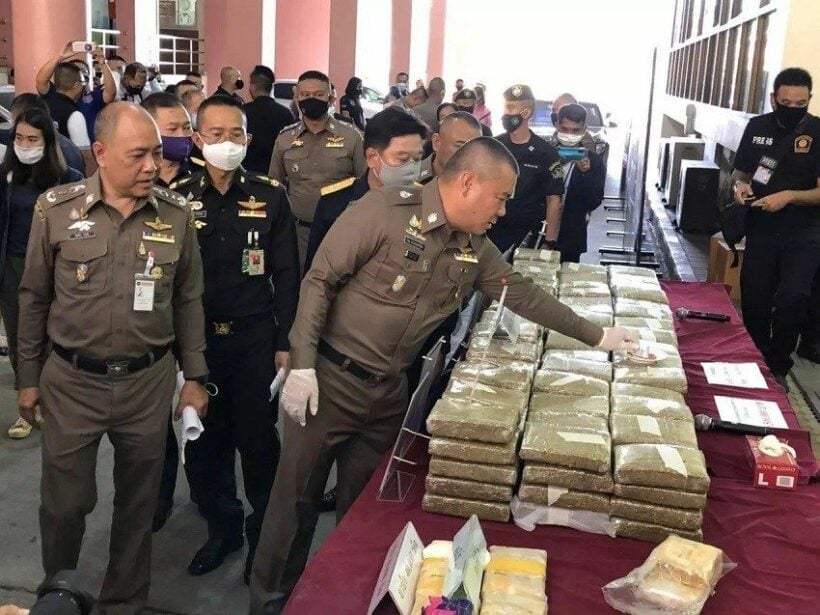 Narcotics suppression police in Thailand have landed a huge drugs haul and arrested 17 people, including both Thais and foreigners. Speaking at a press conference held at Thailand’s Narcotics Suppresson Bureau, police say they have taken possession of 100 kilograms of heroin and over 500 kilos of crystal meth.

In one case, code-named “Black Sasimi”, a total of 11 arrests were made across 19 separate locations, including a Nigerian man identified as John Ume and a Thai man named as Chatchawal Rojanaphat, both of whom are alleged to be the gang’s ringleaders. Police confiscated 5,200 speed pills, as well as over 700 grams of crystal meth and a quantity of kratom leaves. The Chiang Rai Times reports that they were acting on a tip-off received from Japanese police. The gang is accused of obtaining drugs for African nationals in Japan, using Thai women as ‘mules’.

At a house in the central province of Samut Prakan, police seized 500 kilos of crystal methamphetamine and 2 kilogramss of ketamine worth 250 million baht. In Chiang Rai, the authorities have frozen 42 million baht worth of assets believed to belong to a major drug gang operating in the eastern province of Rayong. This gang is accused of trafficking drugs into Thailand through the northeastern province of Nong Khai, which sits on the banks of the Mekong.

Police are also investigating a restaurant in central Thailand which is believed to be at the centre of a drug exchange operation, whereby drugs are smuggled from Laos into the Isaan region in the north-east of Thailand, and then distributed to Bangkok and other cities around the country.

Meanwhile, anti-narcotics forces continue to work on combatting the drug smuggling operations in the Golden Triangle region, where the borders of Thailand join those of Laos and Myanmar. The area has long been considered the centre of drug trafficking in the region, with the number of seizures increasing by 1000% in the last 2 years, as industrial-scale production of crystal meth is ramped up in Myanmar.