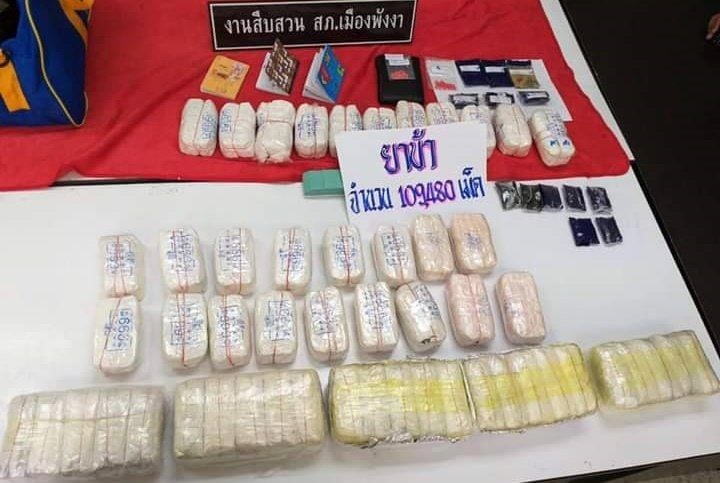 Police conduced a drug bust in Phang Nga and seized more than a 100,000 methamphetamine pills, considered a large amount from a southern local drug dealer. Yesterday (July 9), Phang Nga police arrested 28 year old Kittisak Chuanchom, a cable line technician, while he was preparing to distribute amphetamine pills to his ‘customers’.

Police found him at a house in a rubber plantation on Phang Nga-Tab Pud Road and found 109,480 meth amphetamine pills inside the house. On the same day, police brought him to do a reenactment at the scene.

Earlier, Phang Nga police received information that Kittisak was involved in the drug trade so they started searching for him and found him at the house along with the drugs. Police revealed that the man said he was hired to store the drug at his house waiting to sell them to clients at 120 baht per pill. He told police that the wholesale price for 2,000 pills was 75,000 baht, which makes the price 37.5 baht per pill.

He mentioned that his friend who fled the house worked with him by selling drugs in Phang Nga and the neighbouring areas. The police are currently investigating and try to find more information about his network.