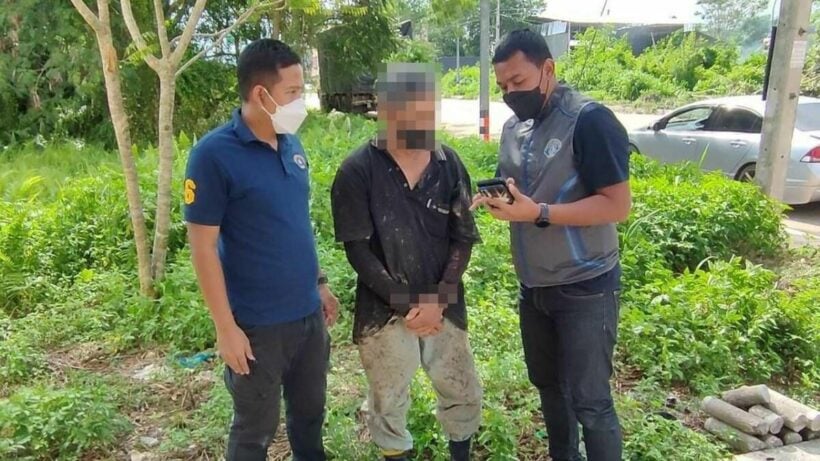 Police arrested a man on suspicion of a murder which took place nearly 15 years ago this morning in Yala province, southern Thailand. Police found the suspect on the side of the road in Betong district and arrested him on a warrant issued by Chiang Rai Provincial Court back in 2007. Police believe the murder was a politically motivated attack.

A man named Japuer Asa went on the run for almost 15 years after he was wanted for a murder which occured in Chiang Rai province, northern Thailand. The body of a man named Kongkraphan (surname withheld) was found in a corn plantation in the Mae Suai District in Chiang Rai province on July 22 2007. The man had suffered serious injuries to his mouth and a gunshot to the chest.

Today, 56 year old Japuer Asa was arrested by police on the side of the road in Yala province on suspicion of murder, possession of an illegal weapon and possession of ammunition. Kongkraphan was Japuer’s political opponent in a local election and police are treating the incident as a politically motivated murder.

Japuer told police that he fled to Brunei after the incident where he stayed for more than one year before returning to Thailand to work as a forest clearance contractor in Betong District, Yala province, where he has been hiding ever since.

Police have taken Japuer to Mae Suai Police Station in Chiang Rai to undertake further legal proceedings. In Thailand, murder charges are punishable by death or imprisonment of 15 to 20 years. The statute of limitations for murders, punishable with death or life imprisonment, is 20 years.