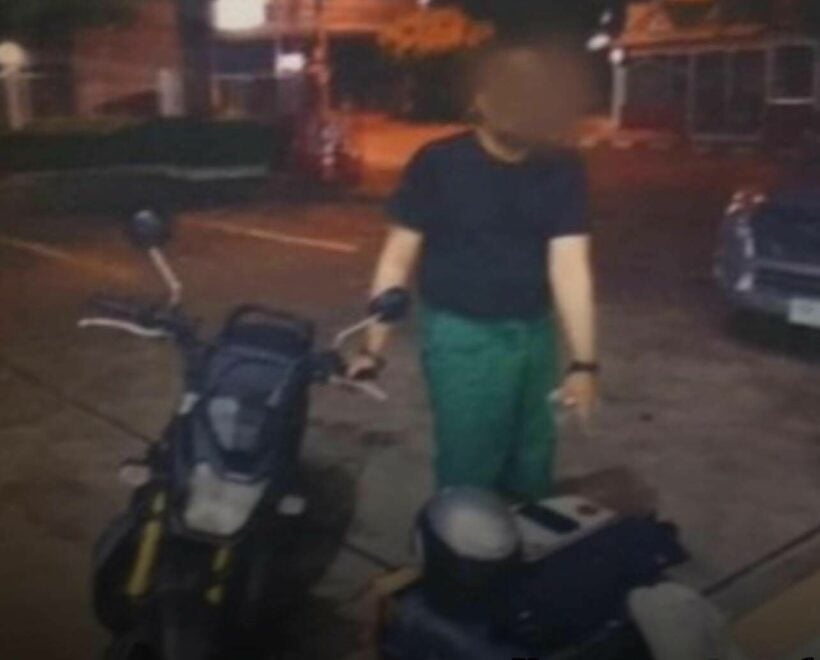 Thai police arrested a man yesterday for allegedly robbing a gold shop and running off with a gold necklace valued at more than 50,000 baht in Bangkok’s Udomsuk area. He allegedly used a fake gun to threaten the shop owner and fled the scene on a motorbike with no license plate. After reviewing surveillance camera, footage police were able to track down the suspect, who was identified as a 42 year old man named Surin.

Police say the gold shop in the Lat Krabang area was selling a necklace similar to the one that was stolen. Police watched surveillance camera footage at the Lat Krabang shop and saw a man drop off the necklace at the shop that same day. The man looked similar to the man who robbed the shop in Udomsok, except he had short hair. Police suspect Surin wore a wig during the robbery to disguise himself.

Officers tracked down Surin and arrested him outside a home in the Prawet district. Police found a wig, fake guns, and the same motorcycle without a license plate that the suspect was seen driving off on.

Surin allegedly admitted to robbing the gold shop and said he sold the necklace for 53,440 baht. He added that he used the money to pay off his debts from the money he lost from online football gambling, police say. Surin was charged from robbery and was take Udomsuk police station for legal proceedings.

gummy
6 minutes ago, Faraday said: True story. I used to know someone, who as a 'dare' went into a Bank with a banana, & told the cashier: "This is a stick up" He got 3 years. Did he get to…

Bluesofa
7 minutes ago, Faraday said: True story. I used to know someone, who as a 'dare' went into a Bank with a banana, & told the cashier: "This is a stick up" He got 3 years. I thought you were…

Faraday
Just now, Bluesofa said: I thought you were going to say he got tree years. He was Welsh, not Irish....

Bluesofa
8 minutes ago, Faraday said: True story. I used to know someone, who as a 'dare' went into a Bank with a banana, & told the cashier: "This is a stick up" He got 3 years. Closest I got to…

Faraday
3 hours ago, Bluesofa said: won't go into details about three boys and a girl locked in a shed together when the police forced the door open. Go on .....tell us....📢

British man convicted of refusing to wear a mask, harassing police, to be deported from Singapore