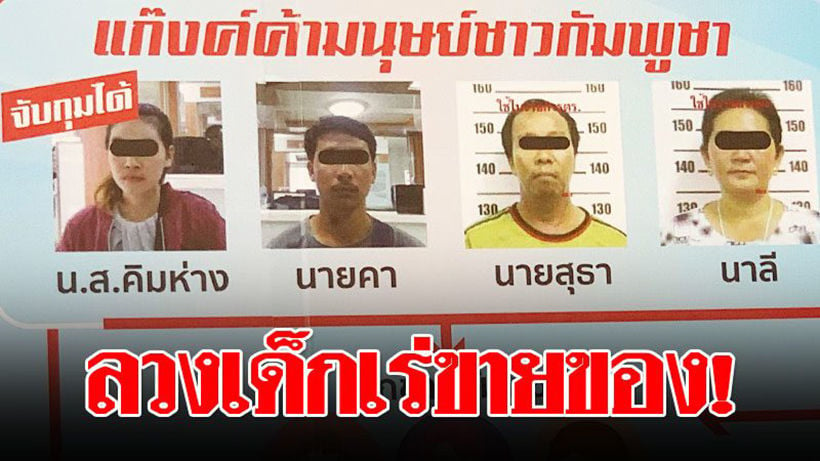 Police have arrested people behind a human trafficking gang who were forcing children to sell flowers in Patong.

On October 25 Phuket Immigration Police held a press conference to report the arrest of a 24 year old Cambodian woman, Kimhang, who they alleged was a member of a human trafficking gang operating on Patong Beach.

The gang were forcing children to sell flowers and “abused” them as well, according to the police at the media conference. The arrest occurred on October 20 as the immigration police actioned an arrest warrant on Kimhang on many charges, including human trafficking, physical harassment and hiring children under 15 years old.

This arrest followed the reports from two Cambodian mothers in January 2018 that their children were lured to work and physically abused, so Patong police issued an arrest warrant and found out that Kimhang was working in the Phuket coastal holiday city before they managed to arrest her.

From the investigation, police discovered there were four people working in the human trafficking gang. They usually take Cambodian children of 13 to 16 years of age to sell flowers and sunglasses near Patong Beach. Kimhang was the person who picked them up and dropped off the children at the selling spots. She also stayed around to monitor them.

Their working hours were 8am until 9pm. After 9pm, Kimhang would pick up the children and bring them back to a rented house on Rat-U-Thit Songroi Pi Road and lock them up. She would count the money they could make each day and if the children could not reach the target of 2,000-3,000 baht, she would hit them with a coat hanger.

The other three members of the trafficking gang were Sutha, Ka and Lee – all Cambodians as well. Police are investigating further and searching for them.