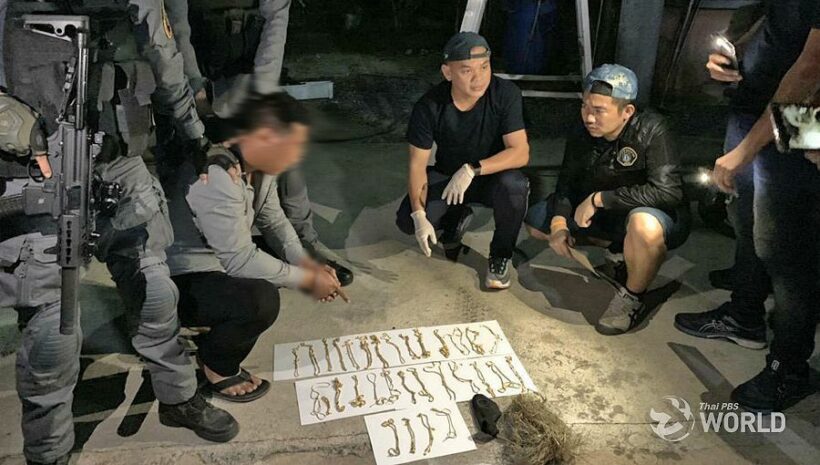 PHOTO: It took police 14 days to identify the man, currently in custody and accused of the murders - Thai PBS World

So how did Thai police track down and arrest the suspect, who has allegedly confessed, accused of a brutal and callous robbery and shooting which resulted in the death of three with four other injured? The suspect was arrested following an intensive 14 days of forensic investigation.

38 year old school principal, Prasitthichai Khaokaew, is now in custody, suspected of being the lone gunman in the gold shop murders. He was apprehended by the Crime Suppression Division’s Hanuman special unit, following an extensive joint effort by police and forensic specialists who analysed hours of CCTV footage from the crime scene at Robinsons Shopping Mall in Lop Buri, and then tracking him along possible escape routes in the moments after the crime.

The man claimed he killed to “spice up his boring life”, according to police sources speaking to Bangkok Post. He lives in Lop Buri and was arrested on his way to school yesterday morning, driving a black BMW Series 5, registered in Bangkok.

Informed police sources, speaking to Thai PBS, say that investigators studied the clothing of the assailant, noting things like the long-sleeved black sweater, grey patches on the shoulders, black sneakers and carry bag, all which provided clues about his unique taste in clothing. They analysed the man’s stance and walk and concluded that he had surgery on his right knee.

Then concluded the gun could be a Czech made 9mm CZ SP75-01, fitted with a long silencer. Delving into the records they found it belonged to, and was registered to, a police officer. That police officer had since retired and was Prasitthichai’s father.

CCTV footage followed the gunman on his escape after shooting dead a security guard on his way out of the Shopping Centre. He was riding a white and red Yamaha Fino motorcycle.

They tracked him past Wat Dong Noi, turning right in Motel 111 lane toward Ban Mai Khun Nuan and then turning right again through Tambon Tha Sala onto the Pahonyothin highway. According to investigators, he made a U-turn in front of Thai Rath Wittaya 1 School to turn into Chompon Road, turned left into Erawan Road before entering Lop Buri View housing estate. The suspect, Prasitthichai Khaokaew, has a house in that estate.

Prasitthichai Khaokaew is the Director of the Wat Pho Chai School in nearby Muang district of Sing Buri province, adjacent to Lop Buri province.

His arrest was carried out by the Hanuman police unit, set up by the Crime Suppression Division last November to replace its commando unit which has been transferred to His Majesty the King’s Ratchawallop royal guard unit.

Police say they doubt the suspect “killed for the thrill” as he claimed, and will continue to question the man.