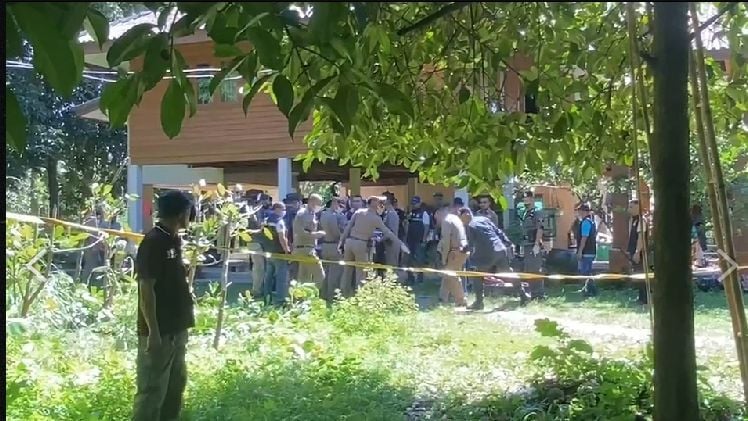 An alleged drug dealer was killed and 3 police officers were injured in a gunfire exchange this morning. Police say 46 year old Udom Rattanamanee, who was killed, and his wife Areeya Panthip were allegedly major drug dealers in Phuket.

Around 8am this morning, police went to Udom’s house in the southern province Nakhon Si Thammarat with arrest warrants for both Udom and Areeya, who was pregnant. Udom was recently released from prison. They showed the arrest warrants to Udom’s father, Preecha Rattanamanee, who then told police he was going upstairs to get his son.

Shortly after the father went upstairs, Udom allegedly started shooting an M16 rifle and an 11mm pistol from inside the house. Preecha suddenly came back with a knife and stabbed a police officer in the neck. An officer was shot in the head and another was shot in the leg. The officers were taken to the hospital, but the Bangkok Post did not report on their condition. Udom was found dead in the house and the 2 guns were near his body.

Areeya was arrested. Preecha arrested and faces charges for obstructing and hurting a policeman on duty.

Phuket man arrested for posing as a monk, asking for money