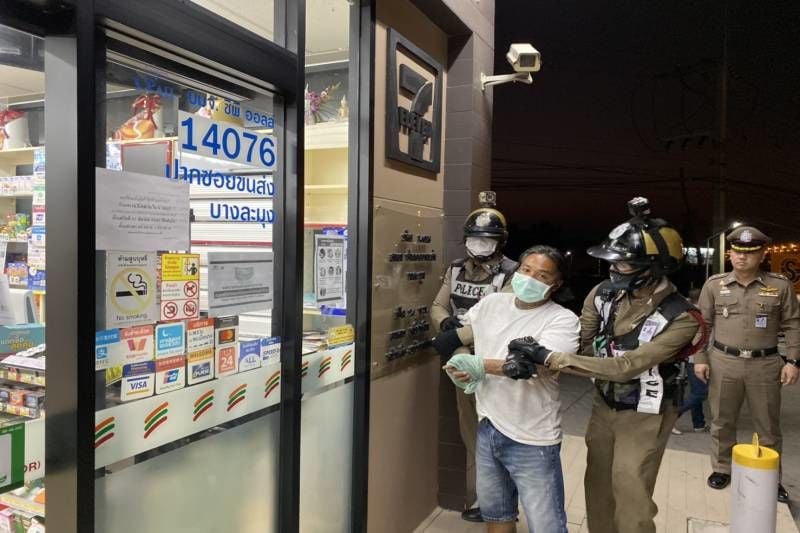 A man with a rather colourful past is now in police custody in the Bang Lamung district of Chon Buri province. The suspect, a former US gangster, who speaks five languages, allegedly robbed a 7-eleven shop of 5000 baht using a BB gun last week.

37 year old “Roger” Phayungsak Wasuwat, was taken by police to the convenience store branch near the Bang Lamung bus station for a reenactment yesterday. The actual crime took place in the wee hours of Thursday morning.

Police say his arrest at a rented house followed three days of intensive investigation. The suspect has been charged with armed robbery, weapons offences and using a vehicle to flee.

“Roger” admitted to the crime and offered up an apology and a wai. He says he bought the BB gun online. He lost his job because of the Covid-19 coronavirus crisis and had no money for food and for his Post Traumatic Stress Disorder medication.

He told police that he continually needs to take the PTSD drugs and see a doctor regularly.

After robbing his local 7-Eleven, he threw the gun and his clothes in a bin and went back to his “normal life” until he was apprehended.

Daily News reports that “Roger” was brought up in California where he was a prominent member of a gang. He could speak five languages and spent 30 years in the US. When he returned to Thailand, he got a job working for a Pattaya tour company, but that shut down due to the Covid-19 outbreak, leaving him broke and unemployed.