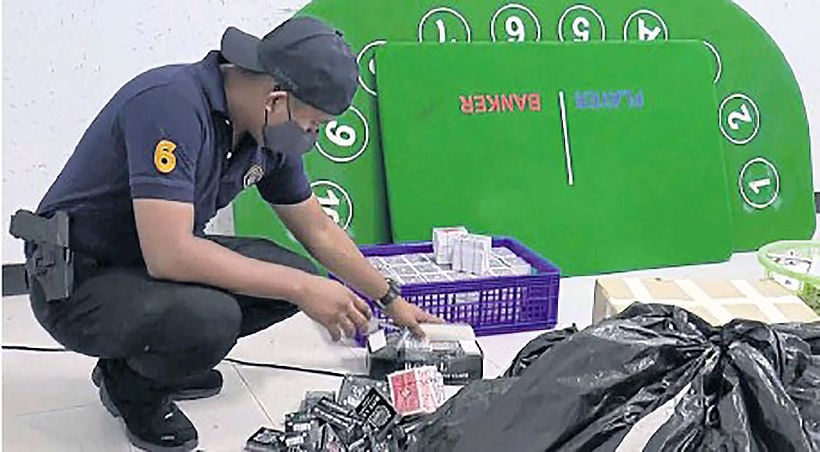 Officers of the Crime Suppression Division arrested 16 Thai and Burmese gamblers at an illegal gambling den in Sungai-Kolok, on the Malaysian border in the southern Narathiwat province. The casino reportedly had a monthly cash flow of over 388 million baht, and was operating in an apartment with many games to choose from. Officials got a tip about a location being used as a casino in the area and launched an investigation, collecting evidence before submitting it to the court for a search warrant.

Officers went to inspect the apartment and arrested 16 gamblers on the spot. Most of the suspects are illegal workers. Authorities were able to seize evidence cash in Malaysian ringgit, Thai baht, some gold, baccarat tables, playing cards, live streaming equipment, laptops, casino chips, accounting documents, bank books, smartphones, and more. The suspects were handed over to Ngai Kolok Police Station, but che casino’s main income came through online gambling. Gamblers from across Thailand played via live streaming in hopes of striking it rich.

There was a group of employees dedicated to recruiting new gamblers. The casino required a password to enter and there were security cameras throughout the area. Guards carefully watched everyone who entered and left. 2 Thai suspects revealed that they were responsible for the system used in online baccarat, and said the casino belonged to a Malaysian boss known as 8KG.

Many Malaysians cross over the border, usually illegally, to partake of the gambling and prostitution they can find in Thailand, which is not available to them on the other side of the border.