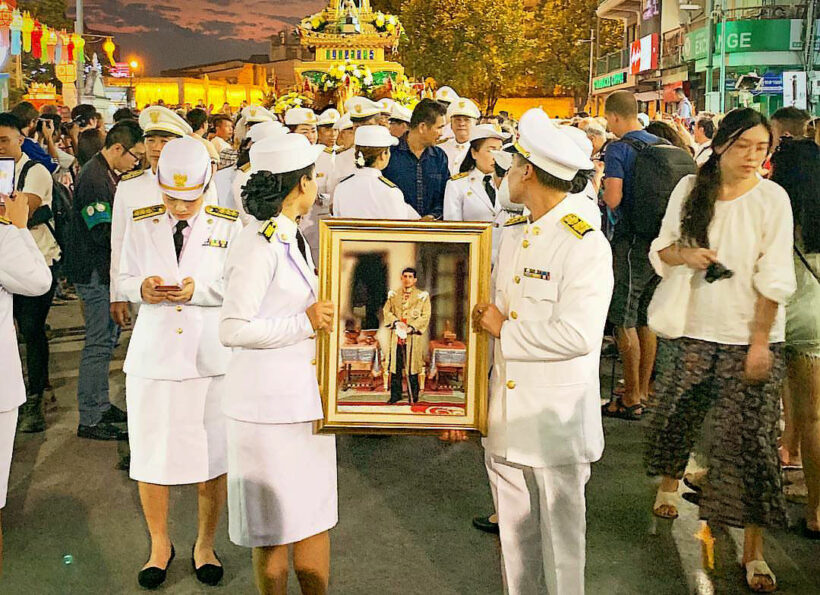 The tradition to formally complete the accession to the throne of His Majesty King Maha Vajiralongkorn will take place this weekend and into Monday, a public holiday, in a series of intricate and complicated ceremonies and mini-ceremonies, full of symbolic meaning and steeped in Hindu and Buddhist tradition.

The elaborate and historic events will be televised – The Thaiger will publish links so you can watch the important ceremonies and parades live online. 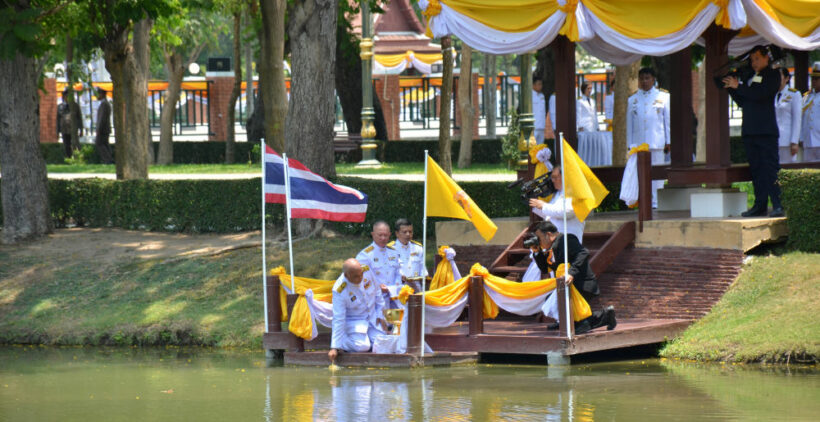 COLLECTION OF THE SACRED WATERS

In the preliminary stages, before coronation, sacred waters are collected from around the Kingdom to be used at the heart of the ceremony – the purification bath known as Song Phra Muratha Bhisek and an anointing with sacred water, the Abhisek.

The collection of sacred water from different sources across the country began on April 6. The water to be used in the purification bath came from five rivers around the country and from four ancient ponds in Suphan Buri. The rivers are the Bang Pakong, Pasak, Chao Phraya, Ratchaburi and Phetchaburi. The four ponds are Sa Ket, Sa Kaeo, Sa Khongkha and Sa Yamuna.

For the anointing, the water was drawn from 107 sources in 76 provinces and from the Satrakom Hall within the Grand Palace in Bangkok.

The water from all sources was ritually consecrated at the principal temple in each province on April 8. The water collected in each province was kept in a long-necked, gilded ceramic vessel bearing the royal emblem of the coronation of King Rama X.

The governors of those provinces delivered the vessels to the Interior Ministry in Bangkok on April 10. The water from Satrakom Hall was drawn on April 12 and also taken to the ministry by capital’s governor.

On the morning of April 18, all the water was carried in procession from the ministry to Wat Suthat Thep Wararam for the evening sanctifying ritual led by the Supreme Patriarch, His Holiness Somdet Phra Ariyavongsagatayana, and Prime Minister Prayut Chan-o-cha. 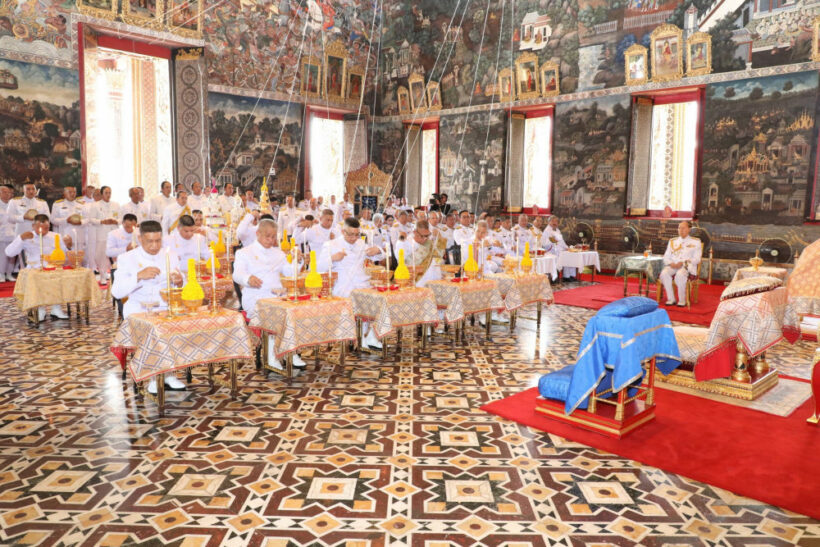 In preparation for the purification bath and anointing rite taking place on Saturday at the Grand Palace, the 86 vessels of consecrated water vessels were moved from Wat Suthat to Wat Phra Kaew, known as the temple of the Emerald Buddha. All provincial governors and top officials participated in the procession on April 19.

Another important part of the preliminary process was the inscription of the royal golden plaques bearing the official title of the monarch, his horoscope and the royal seal of state.

His Majesty assigned MC Pusarn Svasti to represent him at the inscribing ceremony on April 22 and 23 in the ubosot of Wat Phra Kaew.

His Majesty will pay homage to the King Rama V Equestrian Monument at the Royal Plaza in the grounds of Dusit Palace and to the King Rama I Monument at Phra Buddha Yod Fa Bridge. Rama V was his great-grandfather and Rama I was the founder of the current Chakri Dynasty of Thai Kings.

On Friday, King Maha Vajiralongkorn will pay homage to the Emerald Buddha at Wat Phra Kaew, the same day that the royal golden plaques and royal seal of state are transferred to the Baisan Daksin Throne Hall in the Grand Palace.

The primary ceremony including the purification bath, anointing and investiture take place on Saturday in the Grand Palace. The protocol is expected to follow that of King Bhumibol Adulyadej’s coronation on May 5, 1950. The final procedure on Saturday is an audience granted to members of the Royal Family, Privy Council and Cabinet and other high-ranking officials in the Amarindra Vinijaya Throne Hall.

The King will then proceed to Wat Phra Kaew to declare his willingness to become the royal patron of Buddhism.  Members of the Royal Family will also be attending a ritual known as Chalerm Phra Raja Montien – the assumption of the royal residence – something akin to a private housewarming celebration. 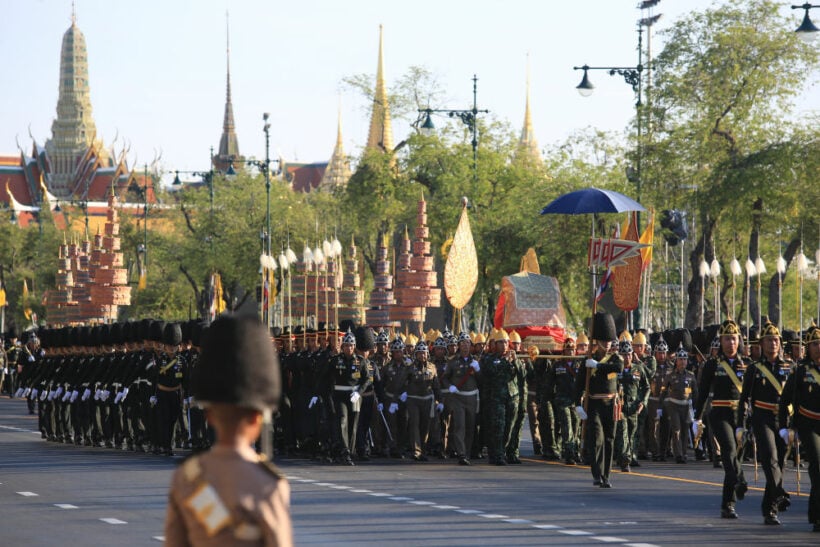 Sunday will see the ceremonial bestowal of royal names and new titles upon members of the Royal Family at the Grand Palace. Then comes a procession along a seven kilometre route from the Grand Palace to Wat Bovoranives, Wat Rajabopidh and Wat Phra Chetuphon.

At each temple, the King will pay respects to the principal Buddha statues and the ashes of the previous kings and queens while at the same time giving the public a chance to demonstrate homage to the new monarch.

The King will grant a grand public audience in the Grand Palace.

The actually coronation ceremonies officially conclude in October with a royal barge procession along the Chao Phraya. His Majesty will board one of the 50 elaborately decorated boats at the Wasukri Pier and be taken to Wat Arun, the Temple of Dawn, to present robes to monks in the royal kathin ceremony marking the end of Buddhist Lent. 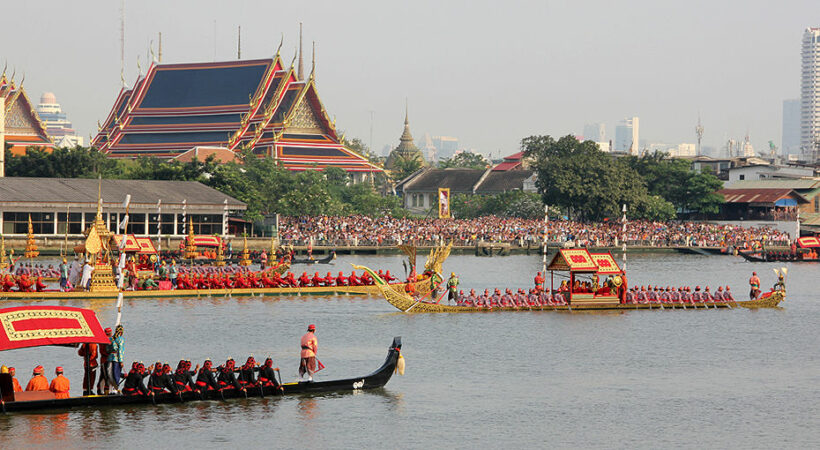 The three official days of coronation, from Saturday to Monday, will bring to a close more than two years of mourning for King Bhumibol, whose coronation took place in May 1950.

The first coronation of Rama I was an abbreviated affair in 1782, shortly after he declared Bangkok the new capital of Siam. Three years later, after several throne halls and the royal regalia were completed, a full-scale coronation took place. 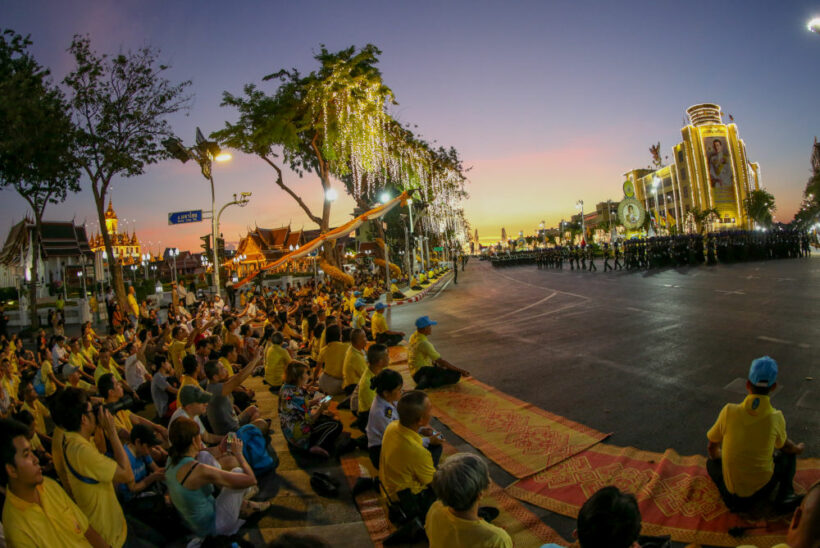