Children and their parents in Chiang Mai are sick of the poor air quality in the northern capital and have issued a new Facebook challenge with the hashtag #CleanAirAct.

The Facebook page has their photos taken with an “anti-PM2.5 dust” flags, they want action and they want it NOW.

Campaign organiser Pharadon Phonamnuai, pointing out that the North has had severe haze problems for a decade and never gets the attention from state agencies, scholars and the overseas media that Bangkok did in December and January, is inviting residents to take photos to post at landmarks such as the Three Kings Monument, the city wall and the Rin Kham intersection in Chiang Mai.

Local youngsters identified by the nicknames Pleng, Plodpran, Cin, Pitta and Tonkla initiated the project with their parents “to convey the message that we don’t want PM2.5 dust”, Pharadon quoted Cin as saying.

“Where is the clean air for children?” the kids want to know. The flags are homemade.

The level of PM2.5 in Chiang Mai has been above the safe limit of 50 micrograms per cubic metre of air since February 25 until at least yesterday, according to the Pollution Control Department.

In Muang Mae Hong Son, however, the PM2.5 level was 94mcg. This “code-red” 94mcg level was recorded in the tambon of Jong Kham, along with an Air Quality Index score of 204, double the safe limit of 100.

Multiple forest fires are believed to be contributing to the haze in Mae Hong Son.

Forest fires are also raging in Phayao despite a ban in place through April 15 on outdoor burning.

As of publication time on Sunday, at least three forest fires were burning out of control in mountainous Dok Kham Tai district, covering hundreds of rai. 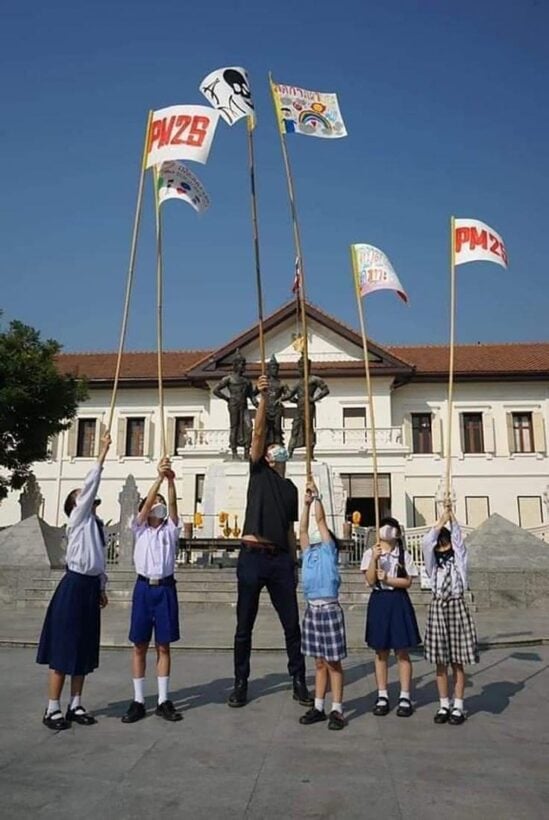 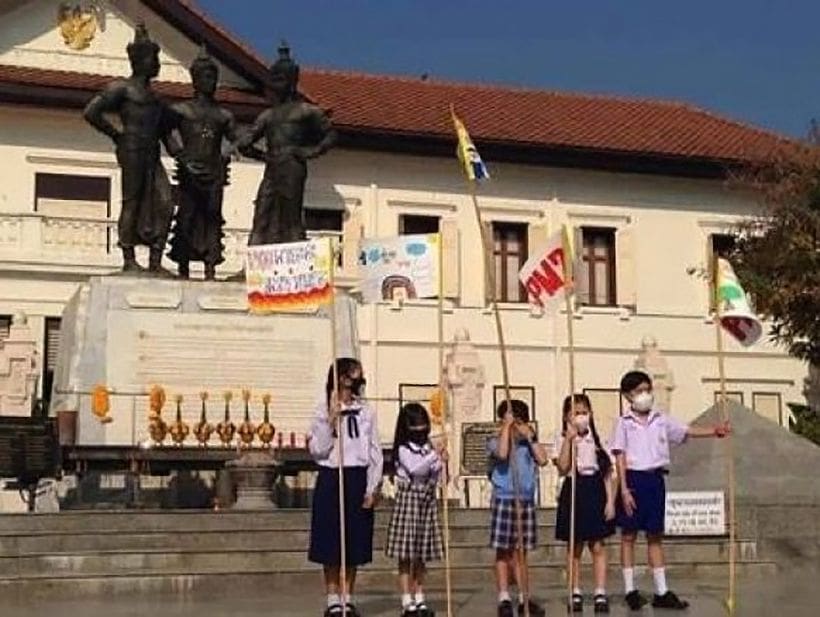 “In mere months, major cities around the world have lost tens of thousands of lives and well into the tens of billions of dollars in economic productivity.”

New data released by environmental groups makes claims that air pollution in Bangkok alone has caused some 6,800 deaths and an economic loss of 81.4 billion baht so far this year. The data, released online earlier by the Helsinki-based Centre for Research on Energy and Clean Air, Greenpeace – Southeast Asia and the real-time air quality monitor IQAir Air Visual, measured smog in 28 major cities worldwide and used models devised by the Global Burden of Disease research program to estimate the health impact.

According to the report, 4.5 million premature deaths each year due to air pollution are from fossil fuels, including 40,000 deaths of children under 5.

Elevated air pollution is linked with numerous diseases, including heart disease and lung cancer. The economic impact was calculated by estimating work absences and years lost due to illness on a per capita basis. According to the report, Bangkok suffered an estimated 6,800 pollution-related deaths from January to June.

The same data estimated 29,000 deaths in Tokyo in the same period linked to air pollution, resulting in an economic cost of US$32 billion (1 trillion baht).

In China, air pollution in Beijing, Shanghai and Guangzhou was responsible for a combined 59,000 deaths and US$27.7 billion (868 billion baht) in losses.

Despite India recording its first drop in carbon emissions in almost 40 years, Delhi suffered an estimated 24,000 deaths due to air pollution, and took a US$3.6 billion (113 billion baht) hit to its economy.

“Powered by data from the IQAir AirVisual air quality data platform, the Cost of Air Pollution Counter tracks the number of lives lost and economic productivity, as calculated in gross domestic product, or GDP, in real time as of the beginning of the calendar year”.

“The counter’s algorithm combines real-time measurement data of ground-level air quality managed by the IQAir AirVisual air quality database with scientific risk models as well as population and health data to estimate how costly air pollution from PM2.5 and NO2 has been since January 1, 2020”.

The largest group, 46.7%, said they were unsatisfied with buses operating on Bangkok streets; 33% were partly satisfied and 20.3% were mostly satisfied.

Asked to identify the problems with the capital’s public buses, 61.1% complained of long waiting and inadequate numbers of buses. Another 51.7% said most of the buses are old, while 41.2% complained of black smoke.

Asked to suggest improvements they’d like to see, 61.6% said they want buses to arrive on time to shorten commuting times. Some 53.1% wanted all city buses to be air conditioned. About 51.9% wanted them to be less crowded by adding frequencies and seats, in line with “new normal’’ and social distancing measures to prevent the spread of Covid-19, according to the poll.