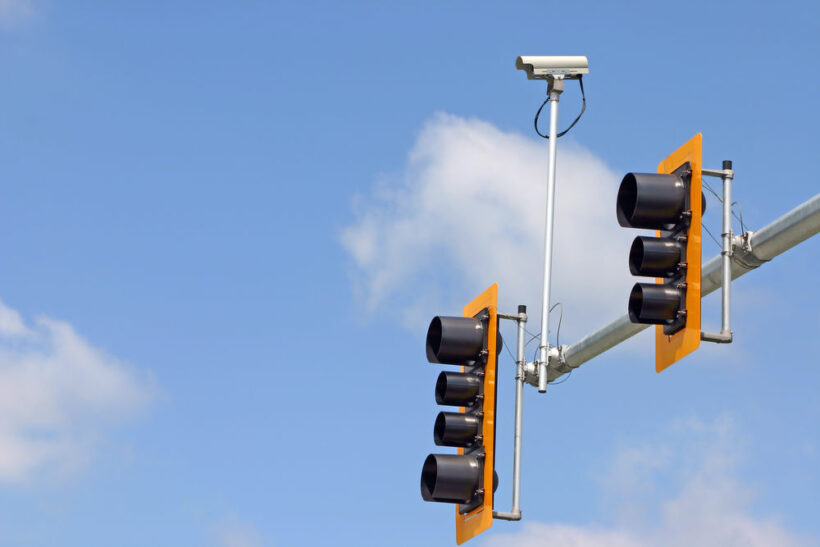 30 major intersections will be fitted with red-light cameras to fine people going through intersections and ignoring red traffic lights. Testing will take place during June and the cameras likely to be operational in July. The cameras will detect the registration plate number and send you an automatic fine through the post.

Police say that despite rumours of Bangkok being a sea of CCTV cameras, they confirmed that there are only 15 cameras in operation since May, 2018 to detect illegal lane changing. It was reported last year that these have resulted in more than 100,000 fines being sent out netting millions.

Here’s the list of the new red light camera intersections…

A construction camp off Bangkok’s Chaeng Wattana Road, which also features the Immigration Office, is reporting that 196 out of 300 workers have tested positive for Covid-19. Palang Pracharat MP Sira Jenjaka made the announcement after an inspection of the camp ended in testing many for Covid. Tomorrow, another 500 workers at the camp are scheduled to take Covid tests. Then, on May 15, the Thai workers at the site will be tested. Siri says the construction camp is an at-risk area as the new infections need a more stringent approach, to keep the virus from spreading.

He says the camp, in Laksi district, was closed after the infections were found. The owner of the camp, Italian-Thai Development, says all the migrant workers at the camp are legally registered. He says the district office told him the area would be closed for 7 days, but did not say why the Thai workers were being tested last. Siri asked the Labour Minister to conduct virus testing at the Thai-Japan sports stadium in the Din Daeng area of Bangkok, saying residents who live around the stadium should be tested free of charge.
Meanwhile, a spike in daily new Covid-19 infections was reported in Thailand today with more than half of the 4,887 infections confirmed today linked to outbreaks at 2 Bangkok prisons. Thailand now has 32,661 active Covid-19 cases, a record high in Thailand since the start of the pandemic last year. There has been a total of 93,794 Covid-19 infections since last year, according to the Centre for Covid-19 Situation Administration.

32 new Covid-related deaths were reported by the CCSA today, raising the pandemic’s death toll in Thailand to 518. A spokesperson for the CCSA says the patient fatalities continue to primarily be the elderly and those with underlying medical conditions such as high blood pressure, high cholesterol and diabetes.

A Covid-19 vaccination hub opened up at the Central Plaza Lardprao in Bangkok, making it the first immunisation centre outside a hospital. Yesterday, around 1,000 people were inoculated at the new centre after registering for a vaccine on the Mor Prom mobile application. Most of those vaccinated yesterday were government officers, volunteers or those who are at a high risk of infection.

Bangkok Metropolitan Administration, the Thai Chamber of Commerce and Ramathibodi Hospital teamed up to open the centre at the Central Plaza shopping mall. The centre is open every day from 8:30am to 5pm.

PM Prayut Chan-o-cha praised the private sector for backing the national Covid-19 immunisation campaign, adding the move may prompt more businesses to set up vaccination hubs. So far, more than a dozen vaccination centres, not including hospital sites, are planned to open up in Bangkok, Prayut says.

The Thai government set the ambitious goal of vaccinating 50 million people by the end of the year. The Thai government also plans to vaccinate 5 million people in Bangkok within the next 2 months in an effort to contain the outbreak in the capital. Vaccinations are now being sped up in high-risk areas such as Bangkok’s Khlong Toey slum. So far, the number of people registering for a vaccine has been lower than expected.

“We must eradicate fears of the Covid-19 vaccine. The government can confirm that all the imported Covid-19 vaccines are thoroughly inspected… Our inspection is probably more stringent than in other countries.”

Prayut says the Thai government has secured 100 million doses of the Covid-19 vaccine and they are working on securing another 50 million doses. He adds that the AstraZeneca vaccine made locally by Siam Bioscience will be ready at the end of the month.

PHOTO: Walk-in vaccination centres are aiming to speed up mass rollout. (via Facebook)