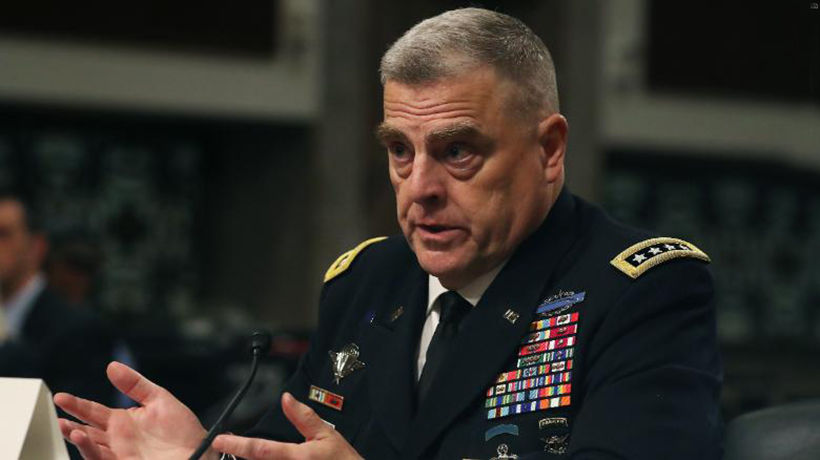 The head of the US Joint Chiefs of Staff confirmed yesterday that it remains unknown whether the coronavirus emerged from a wet market in China, a laboratory or some other location. Army General Mark Milley reaffirmed the view of scientists and the world intelligence community “that it was probably not man-made”.

He was speaking at a news conference yesterday but added that the US is “looking into it”.

The remarks are in stark contrast to both the US President and Secretary of State Mike Pompeo’s remarks over the past five days that there was “a significant amount of evidence that the new coronavirus emerged from a Chinese laboratory”.

The US Secretary of State said Sunday on an ABC television program that there was “enormous evidence” that the coronavirus pandemic originated in a laboratory in Wuhan, China.

“There is enormous evidence that this is where it began.”

Pompeo declined to say whether he thought the virus had been intentionally released.

Last Thursday, the US President Donal Trump was asked by a reporter at the White House… “Have you seen anything at this point that gives you a high degree of confidence that the Wuhan Institute of Virology was the origin of this virus?”

“Yes, I have. Yes, I have. And I think the World Health Organisation should be ashamed of themselves because they’re like the public relations agency for China.”

Neither the US President or the Secretary of State have been forthcoming with evidence to back up their claims.

Meanwhile the President’s appointed leading scientist Dr Anthony Fauci has again dismissed claims that the coronavirus was created in a Chinese laboratory.

“If you look at the evolution of the virus in bats and what’s out there now, the evidence is very, very strongly leaning toward this could not have been artificially or deliberately manipulated,”

Fauci is the director of the National Institute of Allergy and Infectious Diseases.

“Everything about the stepwise evolution over time strongly indicates that this virus evolved in nature and then jumped species.”

The Wuhan Institute of Virology has dismissed the allegation, and other US officials have downplayed the likelihood that it is true.

An the Five Eyes, a network involving UK, US, Australia, New Zealand and Canada intelligence officials, say they do believe that Beijing has not necessarily been transparent about how coronavirus initially spread in Wuhan at the turn of the year, but say they have seen no evidence linking the virus to any lab, or assertions that it is ‘man-made’.

Airbnb slashes 1,900 staff to ride out the travel downturn