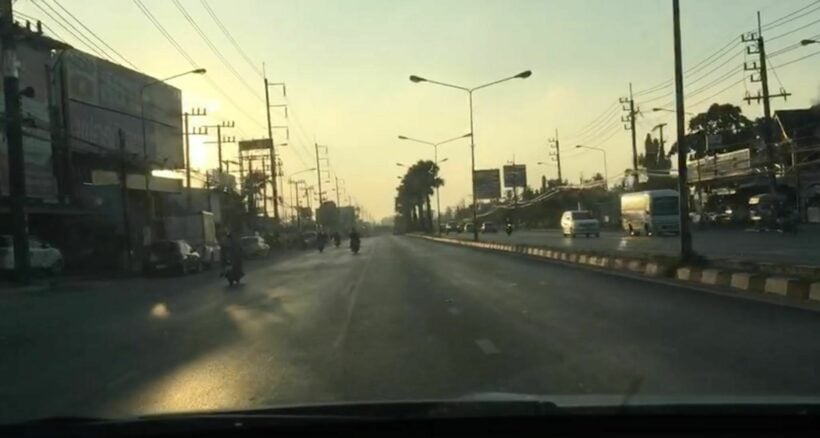 PHOTO: Thepkasattri Road in Phuket, usually packed around 7.30am, but not today - BT

Whilst the touristy west coast of Phuket has been very, very quiet since April when the airport closed (especially the tourist towns like Surin, Kamala, Patong, Kata and Karon), now the east coast has gone quiet this morning.

The east coast, where many of the locals and families live, has been buzzing along since Phuket’s lockdowns were lifted at the end of May. In many cases life had returned to ‘sort of normal’ with the main north/south road arteries, Thepkasattri Road and the Chao Fah roads, east and west, back to their usual, congested selves.

But this morning even these arterials were quiet. Very quiet indeed.

Yesterday a primary school in Phuket made a Facebook post announcing that a student’s parent tested positive for Covid-19. The post was taken down within an hour, saying they were “unofficially” notified by the province’s public health office about the recent case and they are awaiting results from the second test to verify the case.

Nothing has been officially announced by the Phuket Provincial Public Health office to the public.

The patient’s child attends the Kajonkiet Pattana School, a private bilingual school in the Muang district.

Then later yesterday a post was shared widely around the island notifying that there were 21 more cases on the island. It was a prepared graphic and appeared authentic. It was… but was from April this year when Phuket was having its own mini-outbreak of Covid-19. The shared post even popped up on Thaiger staff news feeds so had been widely circulated with people arguing about its authenticity.

As of this morning, another 15 schools have been closed, partly through fears spread by this fake news, or through an abundance of caution for the island’s students.

This morning the Phuket Provincial Office will make further announcements about yesterday’s single case, and any additional news. So far they have only announced 1 local case. There has been some unverified stories about 3 positive tests from people who travelled to Phuket, originating from Samut Sakhon, but these cases are not confirmed at the moment by Phuket officials.

In the meantime, the east coast traffic is very light today with some people contacting The Thaiger saying that 90% of the traffic had vanished off the roads.

The power of social media and ONE fake online post!

Thepkasattri road in Koh Keaw around 7.30 this morning. Would normally be full of traffic as people head to work or take the kids to school. Not this morning…