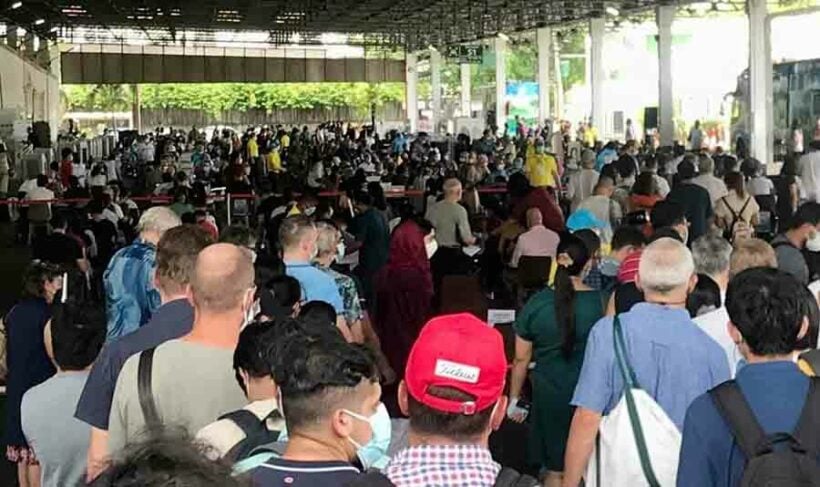 Thailand’s public health department has confirmed another 15,376 new infections and 87 Covid-related deaths over the past 24 hours. 1,041 of the new cases are from the Thai prison system.

Thailand has now reached half a million reported Covid infections since the start of 2020. Just 4 months ago, when the so-called 3rd wave kicked off, there were 1,247 patients in Thai hospitals. Now that number has reached 167,057 with 967 patients on ventilators 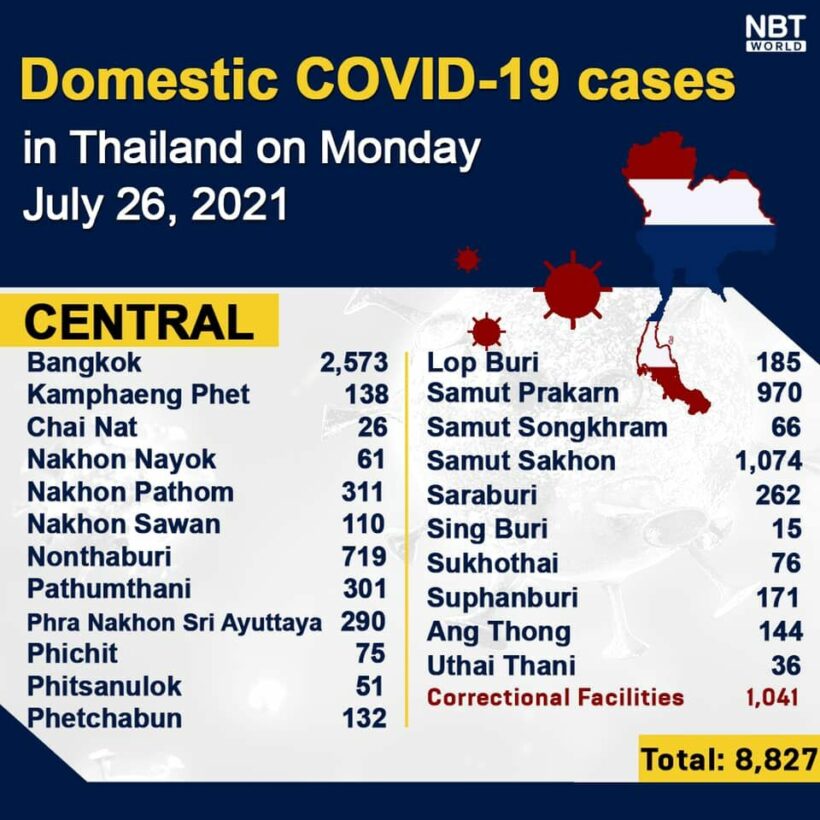 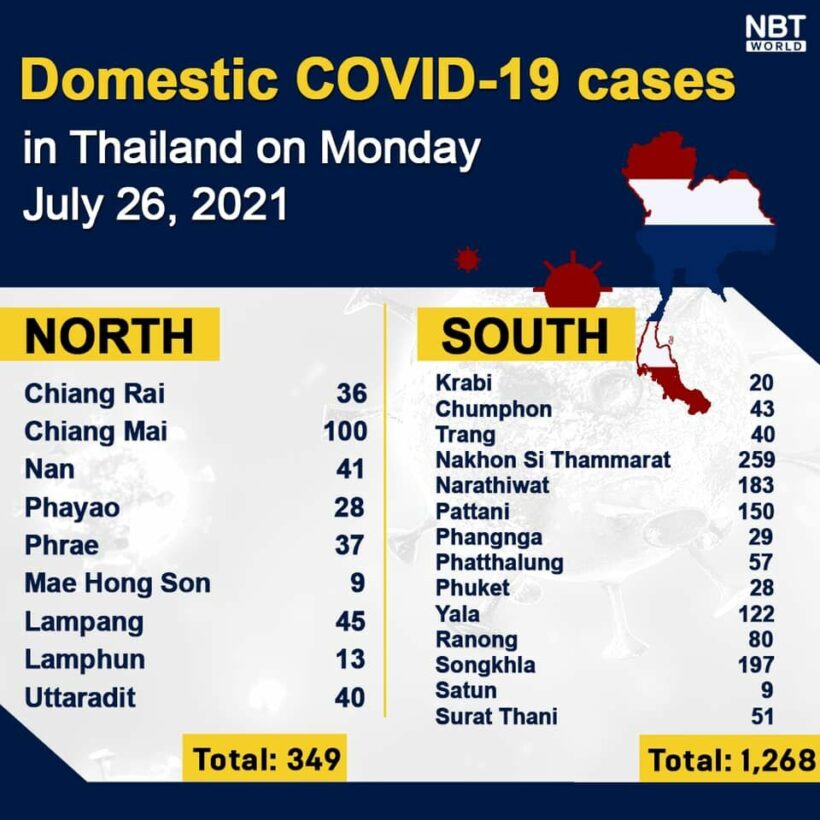 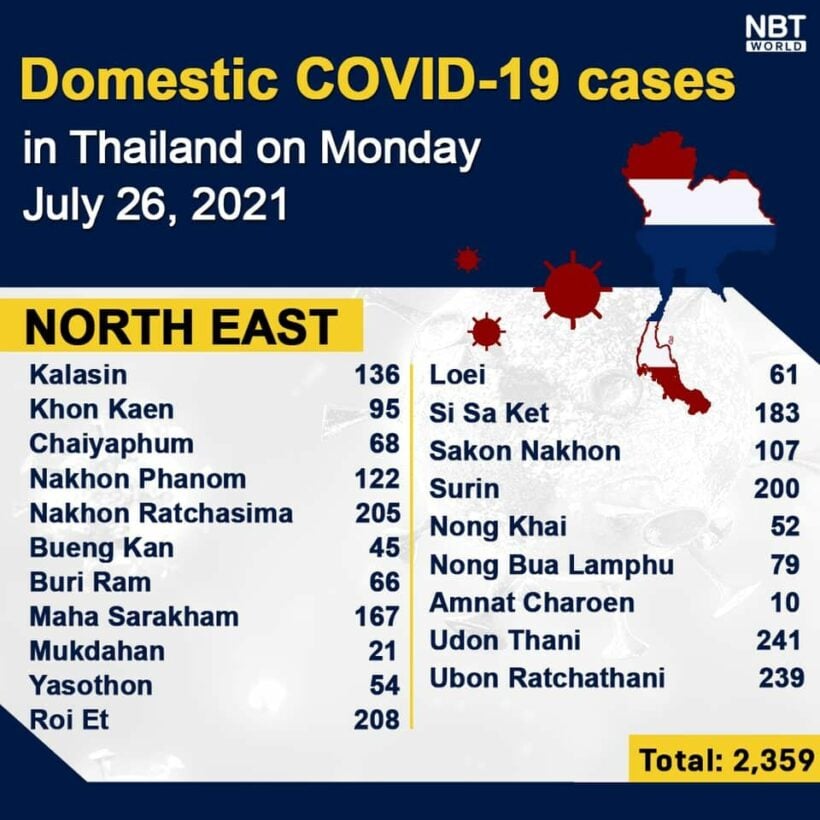 • Thailand’s Ministry of Education will seek Cabinet approval for 21.6 billion baht to subsidise education costs, at 2,000 baht per student in the elementary and vocational education systems, to mitigate financial burdens on parents as a result of Covid-19 – NBT

• In Phuket they’ve had a worrisome 80 new Covid infections in just 4 days (28 yesterday). Depending on how you do the counting (and this is the key), the province will easily exceed the 90-per-day threshold in a week which officials stated as the trigger for altering conditions of the Sandbox.

• Around the world another surge in cases appears to be on the move with 30% rise in new infections in the past month, from an average of 400,000 to 577,000 daily cases since the middle of June. The number of daily deaths has stabilised over this time, but with the rise in new infections experts believe that there will be a rise in the deaths as well, although probably at a lower rate as the world’s vaccination roll out continues apace.

In the US there’s been a 400% increase in new infections over the past 5 weeks. Florida is on target to reach its high levels of the summer last year. The state recorded 14,258 infections yesterday. 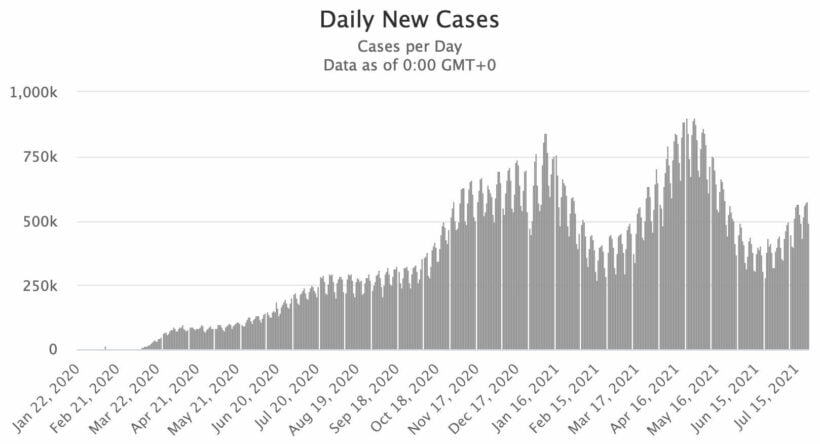 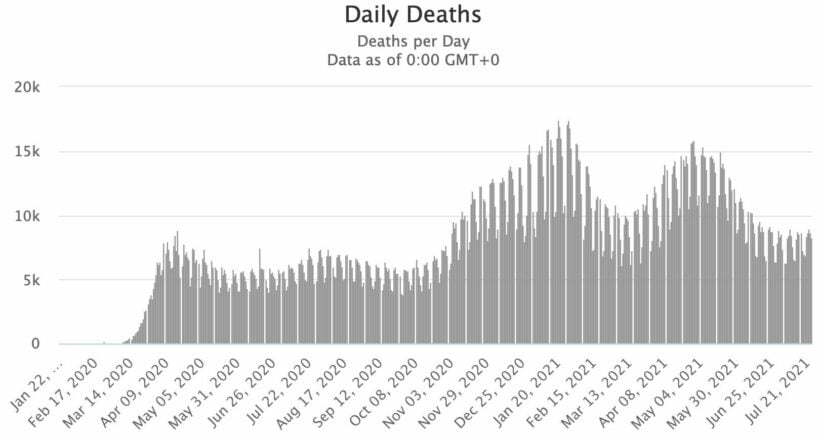 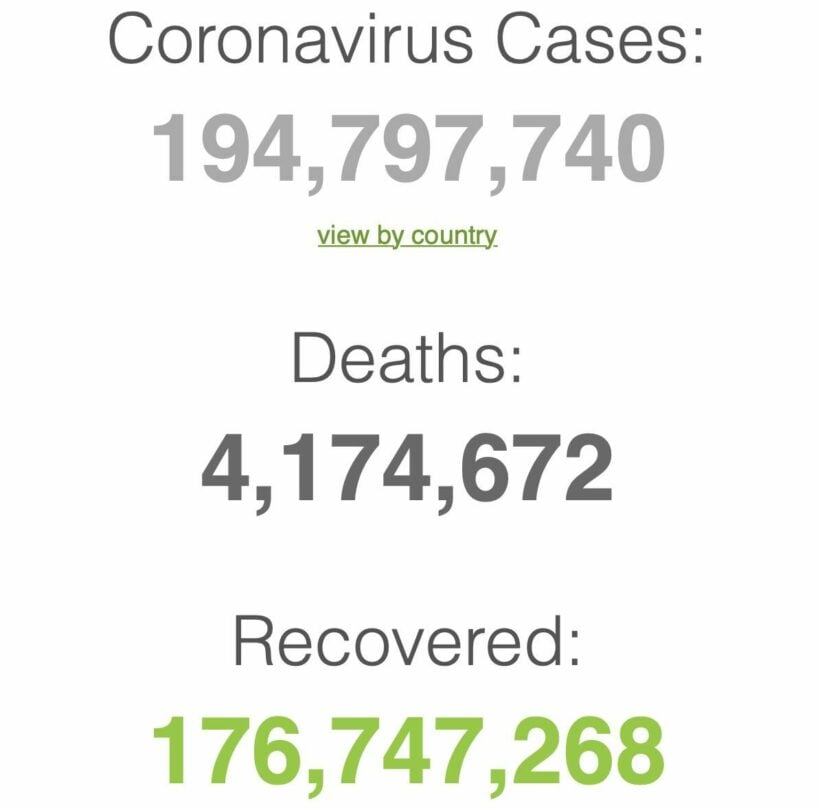 • The Bangkok Metropolitan Administration’s Medical Services Department says, as of yesterday, 24,527 patients were being treated for Covid in public and private hospitals around the city.

Yesterday there were 5,875 new cases in the Greater Bangkok area and 80 new fatalities.

• A train travelling from Bangkok to Northeastern provinces, including Ubon Ratchathani, is carrying 40 people who tested positively for Covid-19, returning home for treatment and isolation in their home province.

Ubon Ratchathani province’s health chief is urging local residents to remain calm as the train is scheduled to arrive today. The train will depart Bangkok heading to the Northeastern provinces on a special mission. 1,490 passengers aboard will be travelling from the capital city, where hospital beds and staff are in short supply doing to swelling Covid-19 infections. The nearly 1,500 passengers on the train opted to return to their home provinces for treatment.

• AstraZeneca has confirmed that it can supply 5-6 million doses a month of its vaccine to the country as planned, despite the complicated production process.

AstraZeneca Thailand MD James Teague explained that the AstraZeneca vaccine is a biological product which starts with the growing of “living” ingredients. The manufacturing process is complicated. The number of doses in each harvested batch is never completely certain, especially in the early stages of a new supply chain.

According to Mr. Teague, by the end of July AstraZeneca will have delivered 11.3 million doses as part of its overall commitment to deliver 61 million doses to Thailand.

Does
Why hasn’t the Phuket Sandbox   been reviewed or stopped as there has been 99 new cases in less than a week?  From Wednesday, 21 July to Monday 26 July (6 days, less than 1 week), there have been 99…
Jason
The "Phuket sandbox" will continue, because compared to the rest of Thailand, Phuket (through vaccination) is in a far better place than the rest of the country. That may well change, because Covid is a changing virus. It is a sign…
Paco
thanks for this daily update of the cases in each place appreciate that
PatrickSatoLee
I can't find Thailand News Today on Youtube for Monday, 26 July 2021.

Andrew Reeve
Quote I can't find Thailand News Today on Youtube for Monday, 26 July 2021.  Hi PatrickSatoLee, Sorry to disappoint as there was no edition broadcasted today.