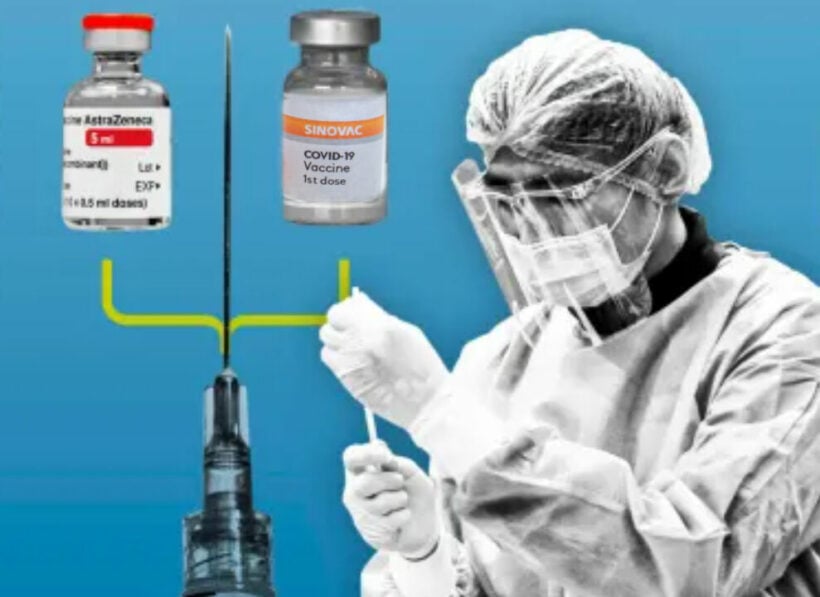 PHOTO: Autopsy results were released of the woman who died after mixing Sinovac and AstraZeneca vaccines. (via FT)

Just as the government was launching their plan for people who have received a Sinovac vaccine already to give them AstraZeneca as a second shot, a tragic case occurred of a woman who received just that and died the following day at home in her bed. Now an autopsy has been completed on the woman who received mixed vaccines and doctors have determined that her death was the result of brain swelling from a clot.

The director for emergency health hazards and diseases for the Department of Disease Control released the autopsy results today following the 39 year old woman’s death on Tuesday in Prachuap Khiri Khan, just one day after receiving the mixed vaccines. The official cause of death is cerebral oedema, which is when excess fluid collects in the brain, eventually causing the brain to swell and brainstem compression.

The autopsy report did not specify if this was considered to be a direct result of the vaccines, a side effect, or coincidence. The woman did have high blood pressure, but doctors at the vaccination centre told her and her husband that the vaccine would still be safe and appropriate for her. Her husband received the same mix of one Sinovac vaccine and one AstraZeneca injection and only experienced minor discomfort after. His wife however felt very tired and went upstairs to sleep. He checked on her and she had been vomiting but declined a trip to the hospital saying she just needed to rest. By 7 pm the next evening when she was still in bed, her daughter checked on her and found her unresponsive.

Mixing vaccines has been controversial and the World Health Organisation originally seemed to be strongly against it before later softening their opinion to say individuals shouldn’t be choosing their vaccine mixture without professional medical guidance. The Thai government has endorsed this approach as the Sinovac vaccines most commonly administered has been ineffective against the increasingly common Delta variant sweeping through the country. They also proposed an AstraZeneca booster shot for those with 2 Sinovac vaccines.

The DDC and Public Health Ministry will investigate this autopsy further to determine if mixing vaccines is problematic or if this incident is an outlier.

Nearly 1,600 people have reported vaccine side effects since February, and 482 of them have had full investigations completed. 240 cases showed no anomalies and 71 people had allergic reactions. 122 deaths and 26 other more severe side effects were considered to be coincidental or not directly linked to vaccines, while 13 studies were inconclusive. Studies did also show that those vaccinated with Sinovac were 5.7 times less likely to be infected with Covid-19.

Shark
Just now, Stardust said: You still dont get and seems to have no infos that many get registrated over their companies or embassies for vaccines. If you dont know things dont write or just guessing things! Neither do you. That's…
Stardust
3 minutes ago, Shark said: Neither do you. That's the beauty, your doing the same thing and now trying to flip it. I actually got vaccinated over my company by the country, i choose to live and pay my taxes…