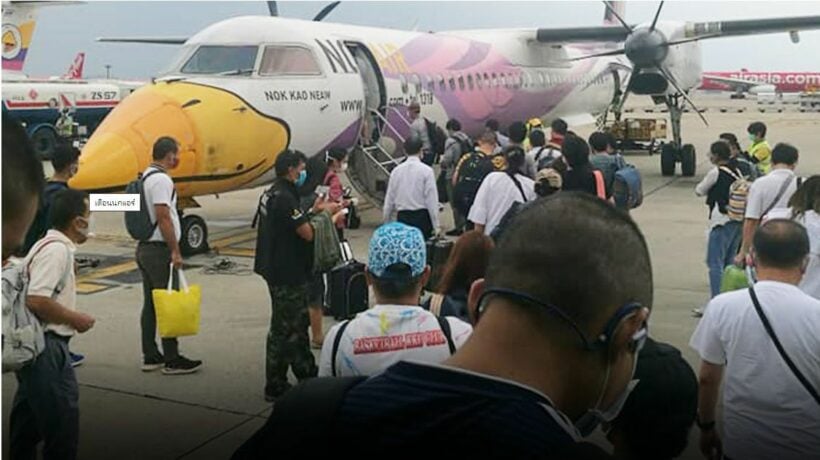 A Nok Air passenger from flight DD7809 flying from Nakhon Si Thammarat to Don Meuang Bangkok last Friday posted on her Facebook account with a picture expressing her concern about the lack of social distancing during boarding and then on the plane.

“The airline notified passengers that it had to make a detour to Trang Airport to pick up additional passengers. The detour not only caused a two-hour delay but social distancing measures and alternate seating to prevent Covid-19 from spreading could not be implemented as the added passengers filled up the plane.” In response to this Thailand’s Civil Aviation Authority of Thailand director general Chula Sukmanop says “the mandatory measure come into effect only from May 1.”

“This picture was taken before May 1, while Nok Air had already notified the CAAT of operating the new Nakhon Si Thammarat-Trang-Bangkok route, aiming to accommodate more passengers.”

“However, from May 1, the social distancing measure must be strictly applied to – from the ticketing booths until the destination airport.”

So far, Thai AirAsia and Thai Lion Air say they will resume limited domestic flights starting May 1. Meanwhile, ThaiSmile (the short-haul subsidiary of Thai Airways) has announced that it is ready to resume services for domestic routes on June 1. Limited destinations will be available and likely only be destinations in provinces that have not had reported cases for the past 28 days.

According to Chula, some of the measures imposed on airlines and passengers include…

Meanwhile, Transport Minister Saksyam Chidchob says “he was aware of the situation and had written to Nok Air urging them to improve their measures to address passenger concerns as soon as possible.

“I have invited Nok Air representatives to discuss this issue. Airlines that ignore the social distancing measures will be issued a warning first, but if the problem continues, they will eventually be suspended.”