The spokesman of the Covid19 Coronavirus Situation Administration, Dr Taweesilp Visanuyothin, announced 8 new confirmed cases of Covid-19 at this morning’s daily press briefing in Bangkok, maintaining the recent trend of single-digit daily increases. The new cases take Thailand’s total to 3,000 since the beginning of the outbreak. No new deaths were reported, leaving the tally at 55.

All of the 8 cases announced today were located in the deep South and either imported by, or associated with, people who recently travelled from Malaysia.

5 of the new cases are in the  Sadao district, Songkhla, all imported by illegal migrants from Malaysia, women aged 19-30 who were already in state quarantine and had no exposure to the general public. 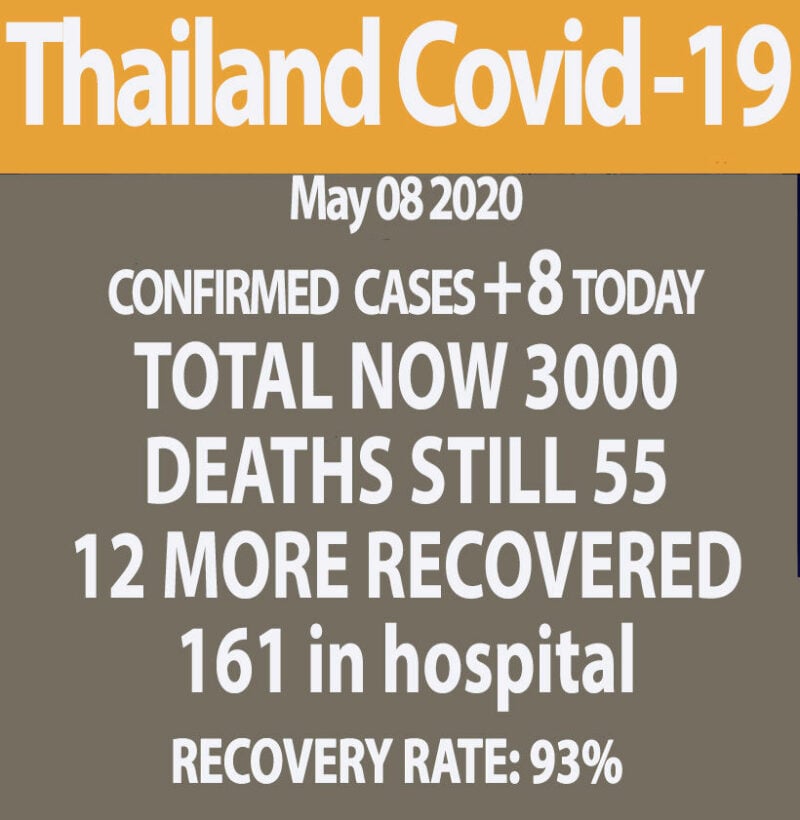 The 3 others, a 45 year old man and two 51 year old men, were detected by proactive testing in Yala province, also at the border with Malaysia, and connected to confirmed patients who had recently visited there.

Only 161 patients remain under treatment for Covid19 in the entire country, with 12 more people being fully recovered and released since yesterday.

Of the 3,000 current cases, 2,784 have fully recovered and been released, making Thailand’s recovery rate 93%. Chachoengsao, Nakhon Sawan, Phayao, and Surat Thani have joined the list of provinces without any new cases reported in the last 28 days.

There have been more than 3.84 million confirmed cases globally and around 269,500 deaths