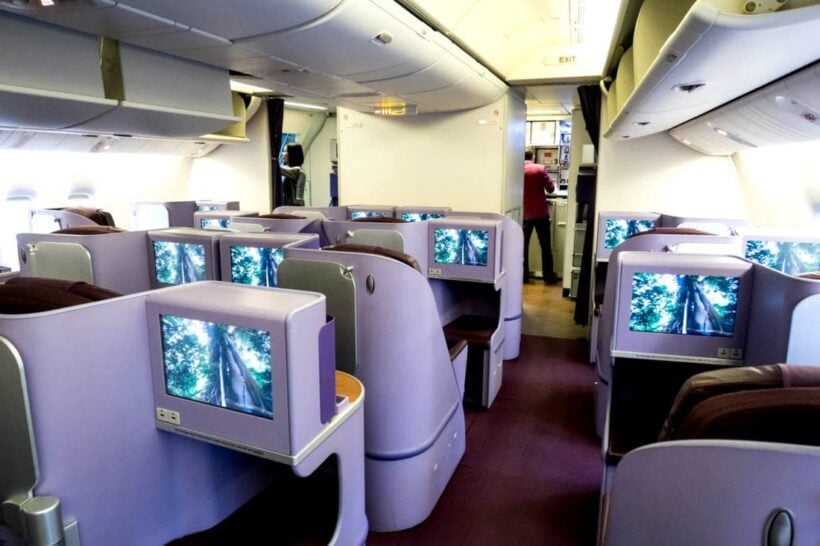 As if their slice of the local Thai market keeps dwindling amidst increased competition and rising operating costs, and one of their planes skids off a runway at Suvarnabhumi last week, wasn’t bad enough.

Now Thai Airways is facing another PR nightmare over bumped passengers on one of its flights.

After the Thai Airways president expressed ‘regret’ and said the issue was ‘severe’, nothing more has been forthcoming over the October 11 incident on a Zurich to Bangkok flight. Two first class seated passengers had to give up their seats for two ‘deadhead’ pilots – off-duty pilots that had to return to go on duty with other flights.

The best response Thai Airways has come up with is preventing the key players, four Thai pilots, from discussing the matter in public.

OK, sit back with a pad and paper and we’ll bring you up to date with what happened…

TG 971 was a flight from Zurich to Bangkok, which had a Boeing 777-300 scheduled to carry the passengers in fine Thai style from Europe back to the Kingdom. But the 777 plane was found to have a problem in the hours before the flight and a 747-400 was brought into service instead.

But here was the problem: the pilots waiting in Zurich to fly the Boeing 777 back to Bangkok didn’t have the certification to fly a Boeing 747, so had to be replaced, requiring them to ‘deadhead’ back to Bangkok as additional passengers.

But the two ‘deadhead’ pilots demanded two first class seats for their journey, requiring two of the upgraded passengers to relinquish their ‘pointy end’ seats.

From original reports, none of them would volunteer their serendipitous first class seating, kicking off a two hour delay whilst negotiations continued until, eventually, two of the seated first class passengers gave up their seats for the ‘deadhead’ pilots (sure most of us had never heard of the term before this story.)

All this has played out badly for Thai Airways on social media.

A source is quoted in Matichon Online yesterday that all four pilots involved have been ordered to say nothing about the incident after the chairman of Thai Pilots Association gave an interview and a fellow-pilot posted on Facebook in their defence.

“For active pilots, crew cabins are available but if they aren’t, seats must be reserved for them – first class for pilots or business class if a plane doesn’t have a first-class section.

“For inactive pilots, there is no rule that first-class seats should be reserved for them or not,” the source explained.

A 747 has more total seat numbers than a 777 so, presumably, the economy customers must have been enjoying a few extra spare seats whilst all the drama was unfolding in the pointy end of the aircraft whilst it sat on the Zurich tarmac.

Thai is yet to release an official statement from the Zurich Station Manager or the pilots involved. Many in social media say much of the problem comes from the sense that Thai pilots have an over-enthusiastic sense of ‘entitlement’ whilst others say Thai Airways forgot the first rule in service business, “the customer comes first.”

In the meantime we have plenty of leaks out of the national airline and social media ‘experts’ to keep us talking about this for the next few days.