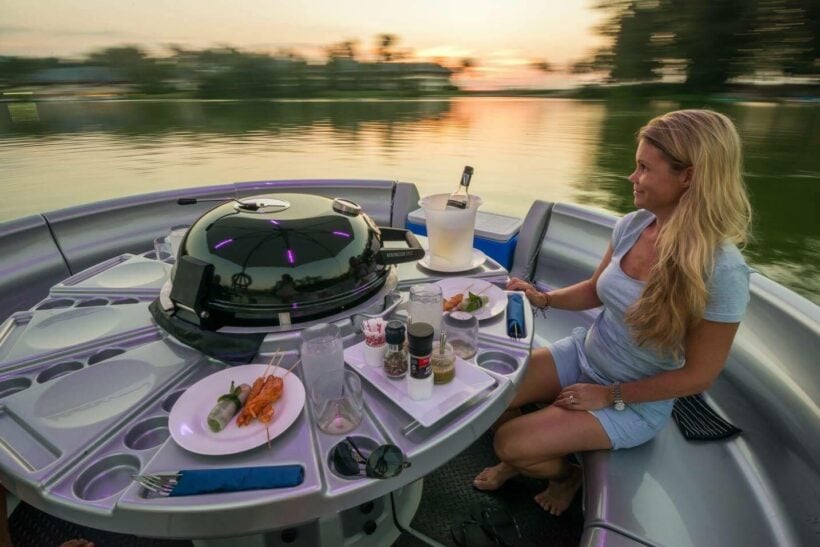 What’s better than eating a donut? Riding around a lake in one.

Now you can do just that at Laguna with the Floating Donut. It’s the brainchild of Miriam Becker who hails from Singapore but has beenspending time in Phuket to establish her new business. Her hard work means that up to eight people, ten if you’re close friends, can merrily mooch around Laguna’s coastal old tin mine lakes partaking in gourmet food and a few chilled refreshments.

It’s a really innovative idea promising a relaxed fun time floating around and going nowhere in particular. The Singapore Tourism Board also thought it was a great idea awarding them the winner of their Kickstarter Fund in 2016. 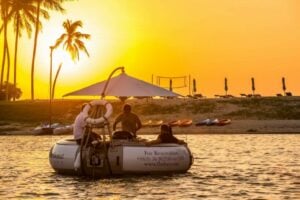 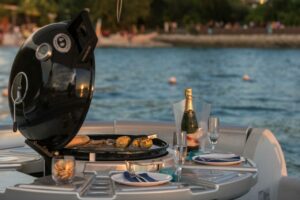 The donuts are deceptively simple but actually include some very clever German engineering. They’re impossible to capsize and have a small electric outboard on the back to manoeuvre around as you saunter from lake to lake and wave at the locals as you float by. They’re robust, seat eight comfortably, have shade above thanks to Sunbrella and are just about the perfect way to relax, eat and be on the water – all at the same time.

With the clever little rechargeable electric outboards your journey is deceptively silent as you crawl your way around the lakes and canals. Even better, find you own little patch of water, turn the engine off and just float around aimlessly.

On our expedition of the lakes between Laguna’s Cassia and Angsana, we chose the barbecue option. You can also choose a Drinks Cruise or a Fine Dining Cruise. The food is cooked in the middle of the circular table that takes up most of the space in the centre of each donut and spaces are moulded into the design of each floating donut to allow for storage and places-to-put-things. Everything is supplied – you can even be your very own Donut Captain or Miriam can provide a competent skipper for you, who can double as a cook too if you’re REALLY lazy. 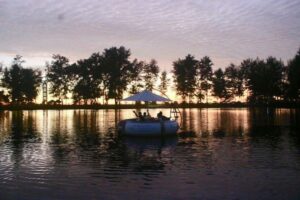 You can find the Floating Donut departure location and offices at the Canal Village jetty in Laguna.

Trip Advisor is already raving about the floating donut dining experience… “We went for a friends birthday on the BBQ Donut and took a 2 hour time slot between 5-7pm which caught the sunset. The food was really excellent, I was a bit skeptical but the standard was that of restaurant food or higher.”

Make your memories round ones and book your own floating donut cruise by calling 07 636 2330 Ext. 2599 or check out their Facebook page HERE and send Miriam a message. 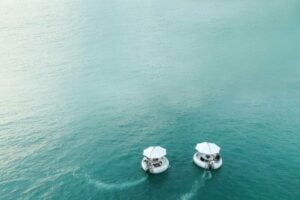