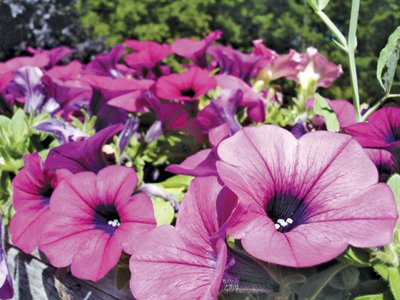 PHUKET: Last weeks’ list of annuals in the Phuket Gazette were predictable choices. The only surprise was that all of them even the so-called African marigold originated in America.

Impatiens balsamina is a bit different, not just because it is Asian, but because it took me a while to discover its identity. But it is not uncommon. In fact the balsam has become naturalized around Phuket, and my local nursery dismisses it as a weed.

A very serviceable weed though. Possessed of a fleshy stem and dainty, narrow and serrated leaves, its main attraction is an abundance of asymmetrical pink or purplish flowers. And a bright red cultivar is now being marketed. Up to two feet tall, it will seed anywhere, often appearing uninvited in pots. Given space, it can form a substantial clump. Shallow rooting, balsamina will droop without water, but that is about its only limitation.

Once its botanical affiliations became clear, it was easy to see a connection I had previously failed to make with the universal busy Lizzie, a variety of impatiens which I had grown both in England and Spain. That it is also cultivated here shows just how adaptable it is.

One of the world’s most popular border plants, it comes in a wide range of colors from white to deep red, mainly in single but sometimes double floral versions, and with foliage that may be purple or variegated as well as green. Low-growing, it blooms more-or-less continuously: hence its prized role as a bedding plant. Although it may be less vigorous here than in cooler climes, it should flourish in a moist, semi-shaded location ideal beside a pool or waterfall.

In Phuket’s plant nurseries, it is often found in hanging baskets.

Expats love the petunia because it reminds them of home, where every urban lamp-post seems to sport one, with its pendulous, luminous masses of magenta, white or multicolored blooms. It is indeed the window box or hanging basket flower par excellence. One of the most hybridized of annuals, its most spectacular blooms are found in the grandiflora cultivars.

Up to four centimeters wide, they are available in many different hues, including bi and tri-colored flowers. But the delicate, trumpet-shaped petals are easily damaged by heavy rain. For more bountiful blooming, go for surfinia varieties. Although they sport smaller flowers, they are sturdy, and prolific and the plants grow in a vigorous, spreading fashion. Like multiflora cultivars, which produce even more blooms, they tolerate less sun, and are better suited to life in containers.

If petunias are associated with the Northern Hemisphere, the helichrysum bracteatum or straw flower is very much an Australian native. Like a number of plants, including the helargonium (geranium), whether it is treated as an annual or perennial depends on climatic conditions.

The straw flower has grayish or green, lanceolate foliage, and bears lots of dazzling flowers in a wide range of colors typically orange or red, but also white, salmon and yellow.

But what makes it special is the everlasting flower heads: they consist of a dense center of florets from which radiate papery bracts. These bracts which give the flower its name initially curl over to protect the florets, and then usually flatten out to display their brilliant hues. As dried, cut flowers, they last for years and years.

Surprisingly the straw flower is not common here, though Phuket’s climate would be no problem. Are we missing a trick ?

Tip of the week – Mother plants
At various times, we have talked about propagating and reproducing plants by seed, layering, cuttings and division. Some so-called “mother plants” give birth to plantlets which can be separated from their parent.

I was reminded of separation and division by a piece written by Normita Thongtham in which she visited a garden specializing in ferns. Ferns mostly regenerate by producing tiny spores, which appears on the underside of leaves. And like many seeds, these spores can result in new plants which are “sports” or mutations quite different from the parent. As the fern grower remarked of a neprolepis fern: “I’ve never seen one (new plant) which grew to look exactly like it”.

Fascinating. But if you must have an exact copy of the parent, the only way is by plant division. This is the best method for most gingers, cannas and heliconias – as well as ferns.

Phuket Lifestyle: The race that stops a nation