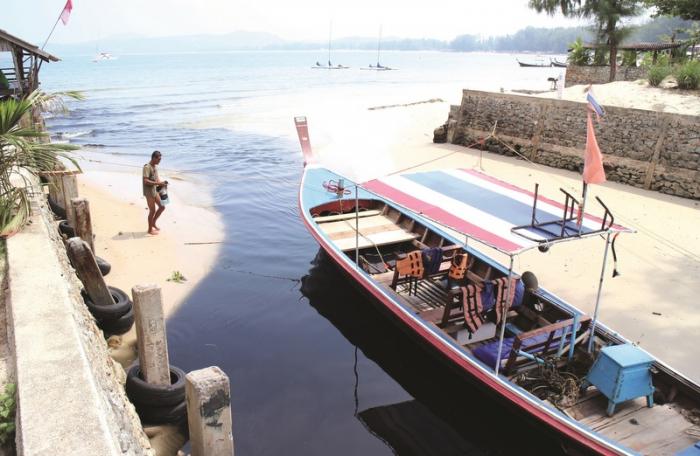 PHUKET: “Water, water everywhere, nor any drop to drink” would do nicely as a motto for Songkran. When my son and his partner paid a surprise visit from London a few years ago, they unwittingly chose to arrive on the day of the water festival. The motorbike trip from Phuket City to Rawai, a mere 16 kilometers, took three hours. Not only were they soaked to the skin, but all their belongings, including two computers, were drenched. Innocents abroad!

Songkran returns this year on April 13th – at once a festival of purification, an opportunity to welcome the new year, a chance to make merit by washing Buddhist icons, and an excuse to indulge in lots of horsing around with water at alfresco street parties. While it is a joyous family occasion, it has its downside – as my son discovered.

More importantly, road accidents rise steeply, partly as a consequence of drunk driving and speeding. But despite the fact that the festival comes near the end of Phuket’s dry season and in the hottest month of the year, there is rarely any concern about water shortages. In fact, Mr Wiwat, director of the meteorological office, recently expressed the belief that reserves will last until May’s seasonal rains. Surprising when one considers just how much is used for domestic purposes alone. To take one obvious example, my garden needs at least two hours of watering every other day. But more reservoirs and extended mains systems have made a big difference.

The position in regard to water disposal is far less comforting. On neighboring Phi Phi island, which daily produces 40 tons of solid trash, there is no sewage plant at all. Apparently building one would cost 300 million baht and the island, despite its huge revenue from tourism, cannot find the money. As a consequence, a shocking 83 per cent of the island’s waste water is pumped straight into the ocean. “Our only hope is that hotels, restaurants and other businesses act responsibly,” declared Mr Punkum of the local OrBorTor. Some hope!

Is Phuket any better? Admittedly, it does not endure the same jam-packed congestion as Phi Phi in high season, but the rash of high density apartment blocks, laundries and hotels means that the spewing forth of domestic outflow is unremitting. Where does it all go? Are septic tanks adequate? Should we be resigned to the slow seepage of domestic effluent into the environment? How much dirty water is discharged straight into public sewers? What about escalating levels of pollution?
These may be rhetorical questions, but solutions need to be found.

The shortage of water treatment plants on the island, and polluted canals, mean that black water has been pouring into the sea for years, especially after prolonged rainfall. In the last two years, residents have complained about the “stinking black wastewater” at Kamala Beach, or in Nong Harn pond at Karon. There have been similar pollution problems at Koh Racha, and mass poisonings of fish in Klong Bang Yai, a canal in Phuket City that empties straight into the sea at Saphan Hin. When the quality of the canal water at Bang Tao was tested in 2014 (a projected wastewater project was abandoned that year), the biological oxygen demand (BOD) showed readings five times above normal. Sadly, the results of tests conducted on water quality at Phuket’s main beaches have never been made public.

The process of killing the goose that lays the golden tourist egg may be slow, but it is an inexorable one.

On a recent flight down from Bangkok, the flight path followed the coast from the estuary of the Chao Phraya River down past Hua Hin and on south past Koh Samui. Predictably enough, a huge brown stain stretched along several kilometers of it!

If you have gardening or environmental concerns, contact Patrick at drpaccampbell@ gmail.com. Many of his creative and academic publications can be found on his website: Green galoshes Wordpress.

Looking Back: Understanding the origins of Thailand’s water-filled New Year